I am a big fan of underwater series in general, and especially Aquazone. Unfortunately my knowledge is generally located in area of Aquasharks vs Aquanauts conflict, but now we will talk about later Aquazone - about Hydronauts. This theme appeared in 1998. Theme synopsis was simple and same as before. There are good guys - Hydronauts, they get crystals. There are bad guys - Stingrays, they try to steal crystals. Neither of the sets showed how this crystals are used, so it is pretty hard to find out the reason of conflict. If we look at LEGO Mania 98, we will find a comic story, where Lego Maniac together with hydronauts search for crystals to remove them, because they are "Something that didn't belong to our world," but it is a kind of strange. Interesting moment if aquanauts and aquasharks were on pretty same technology level, here we got popular LEGO idea, high tech good guys, vs bad tech enemies. This is especially seen in their suits and helmets design.

Hydronauts are direct successor of Aquanauts, buy they have colour palette change, yellow-blue has been converted into yellow-black-green. As there wasn't any black in Aquanauts set, but it was widely spread in aquasharks, we can pretend that aquanauts and aquashark mix has made hydronauts. By unknown rules red and blue screens mix gave us transparent green result.

Also there was a Sea-tron concept back in 90s, and there were mainly green. It seems that it gave some inspiration for this theme.

I think now we can stop our historical adventures and go to the review itself , so here it is 6110 Solo Sub.


As many old LEGO sets that I have bought last summer, this was without a box. So you can immediately see many interesting parts. 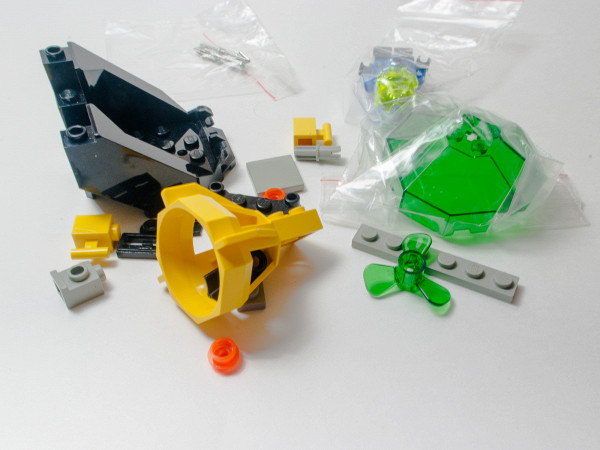 I like looking at old LEGO boxes (sometimes they are interesting), so here is an image of the box from Ebay.

We can see box design, that was ordinary in 90s: "small" theme logo (it was available only on US boxes, EU ones were without it) and big set image. Pieces count ashamedly hiding in the corner. There are 22 parts (and even only one minifigure :) ), besides, it is the smallest set in series, it should be small. 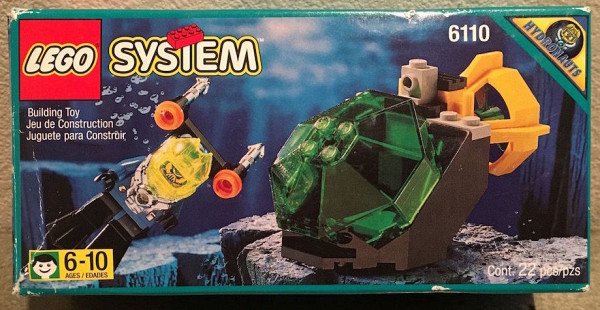 At the backside you can see alternate models. Unfortunately second one is unreadable. I couldn't find a better picture of it.

As difference with now days sets, there is no scale identification. May be box images were more realistic, or LEGO wasn't pushed to publish scale data. 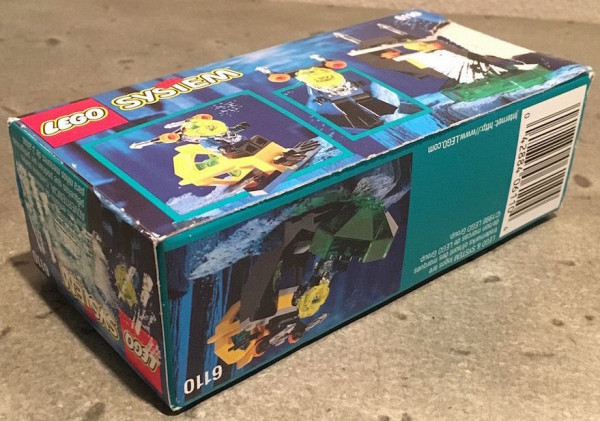 Now we will continue with our hero, oh, heroine (I am shocked myself!!!). Crystal Miner. You can think that this is profession name, but according to LEGO Mania it is heroine name. After thoughtful reading I have found that it is she. Another two figures from the series is Captain and Navigator. So it seems that the only subordinate in that team is a woman. Feminists should look carefully at LEGO :D

There is a strange mask on a face. It is strange, because ordinary mini-figures in helmets doesn't get printed mask. Mask makes Crystal look like smaller version of Bane.

By longstanding LEGO tradition, we got some indicators, buttons, control panels printed on torso. Hands and legs are printless. Also this women character has no silhouette printed. Back then it was normal. 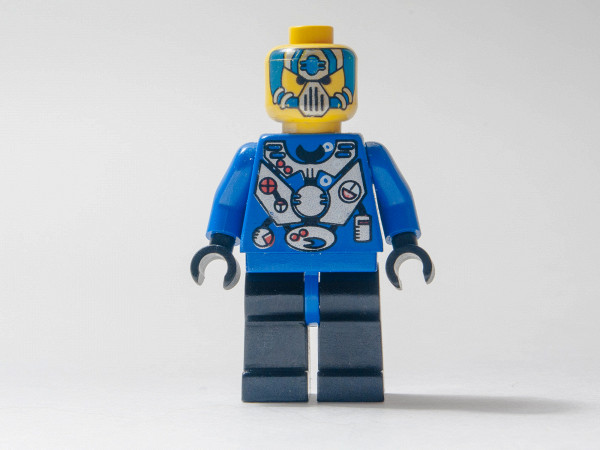 Backside is fully without prints. At old times you can turn minifigures to their back and get a long and hard game of "guess who is this", now we can easily distinguish minifigures by prints on their back. 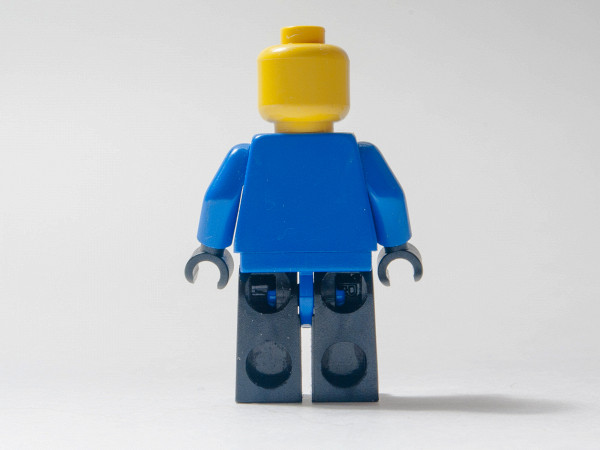 Scuba armour/helmet - is similar to the one we get from aquanauts. But colour change is dramatic, we get a transparent neon helmet, and chrome armour. LEGO has left us without chrome parts now. May be the reason is problems with quality. Chrome parts are easily spoiled by mis proper use. But they look awesome. 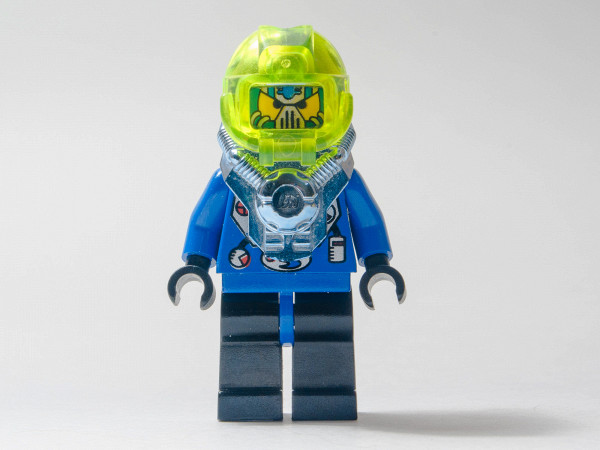 From the back this armour is unique for that time. Also it has two pins, so that you can attach anything to it. I thought that this was a Nexo-Knight invention, but it seems that we have seen it already in 90s ;) 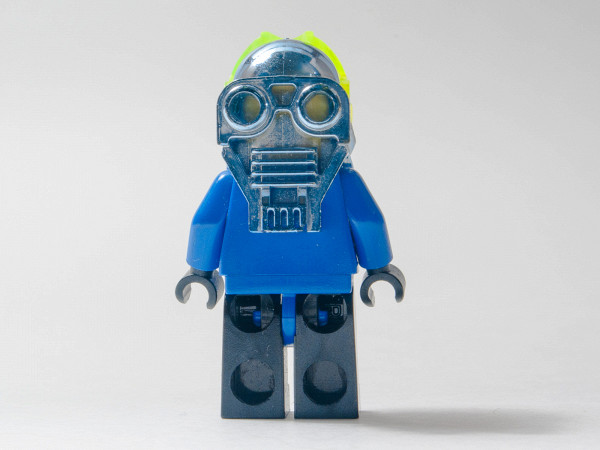 Visor opens normally. Armour limits hand articulation, with maximum like Dart Veiders favourite gesture, but armour sits steady, and doesn't take off by hand movement, as we have seen at aquanauts. 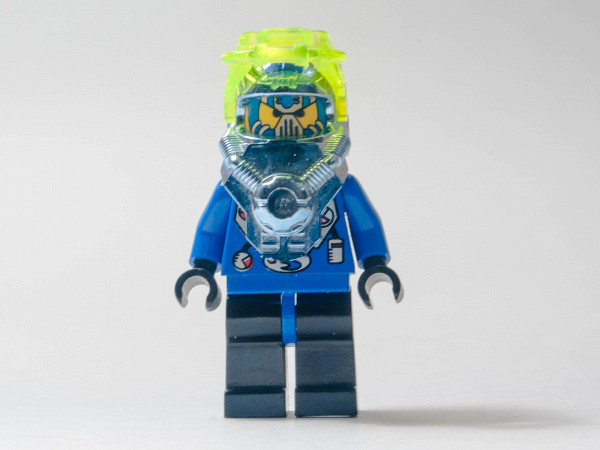 Besides the pair of black flippers, there is a strange construction that is fitted to minifigure, from one side it is similar to some underwater lightning. It is fully logical moment. 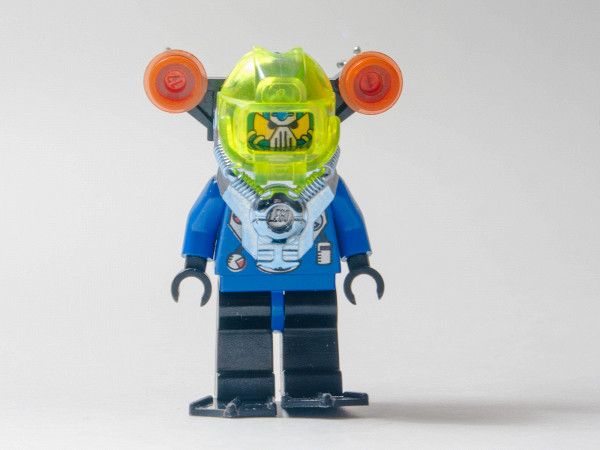 But there is two harpoons on the back. Why, on the back?! This makes minifigure very unstable, it steadily falls to its back. 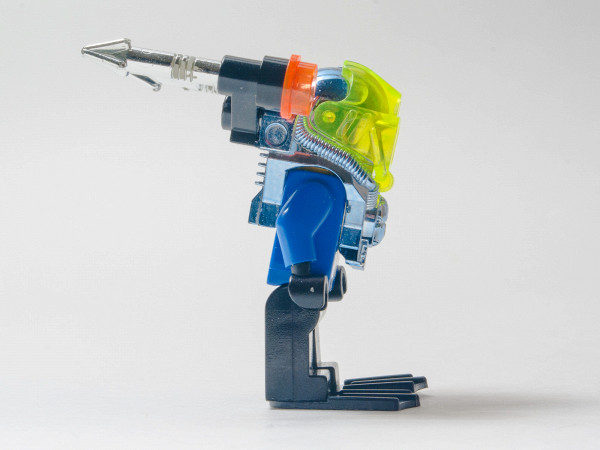 Also i don't see any sense in it. They are not needed there. Minifigure can't take them by itself. Maybe this construction must shoot at followers? But we all know that best defence is offence. Anyway is is pretty crazy thing. Good, that as all minifigures, Crystal is not a tiny lady that can't hold anything except handkerchief. 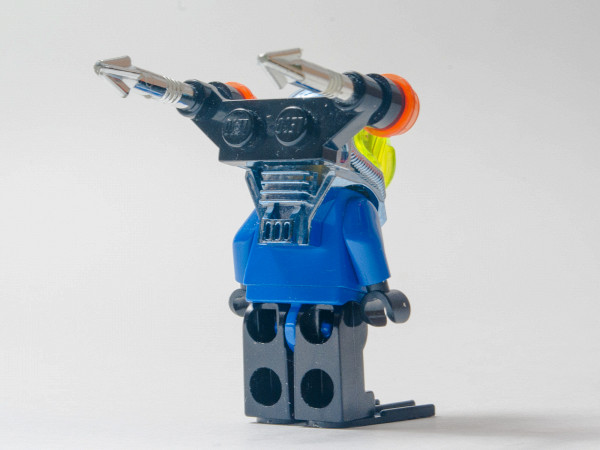 So we had talked about heroine, know it is submarine turn. This is one place submarine. "So small that it can get into any cave, searching for crystals."

Also it is so small, that it doesn't get any control panel, or seat, or anything. Even tiny 1749 got control panel. Corresponding side smaller 6107 also have some control device. 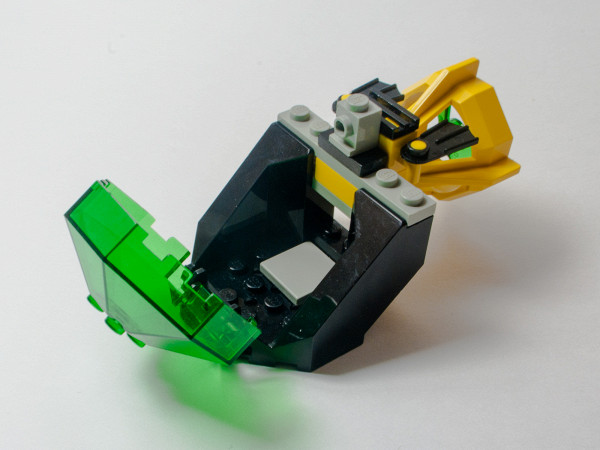 There is an opening screen/glass. It is rare, because generally smallest sets got now glass, only some sort of scooters. (of course we can count 6125 as smallest one, and it also has a glass).


Screen part itself is not very rare. It appeared Blacktron II in 1991 (also green, but transparent neon green, not transparent green as here), and disappeared in 00s.


But it is very rare in this colour. It appears only in two sets. This one, and the series biggest 6199. So transparent green octagonal glass can be count as big rarity. 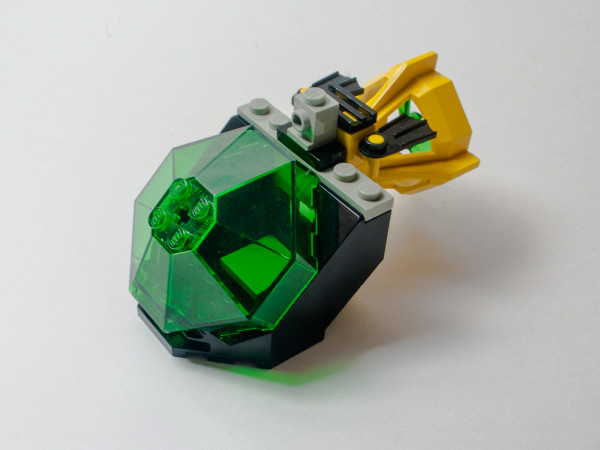 At the back we can see a transparent green propeller, it is also exclusive for this theme. It is attached to yellow aquanaut propeller housing. 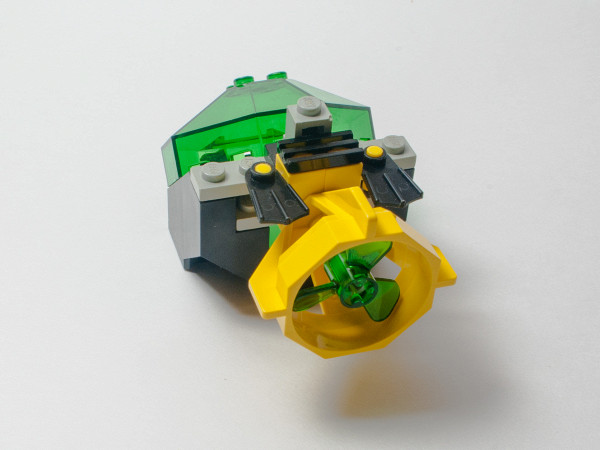 At the top is flipper holder, as always, aquazone flippers are attached somewhere uncomfortable for minifigure. 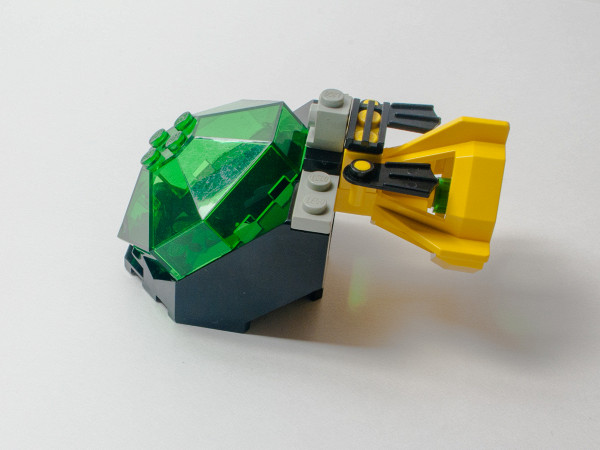 Then minifigure gets into sub, that strange construction is also placed on sub. In this case it looks threateningly and in place. 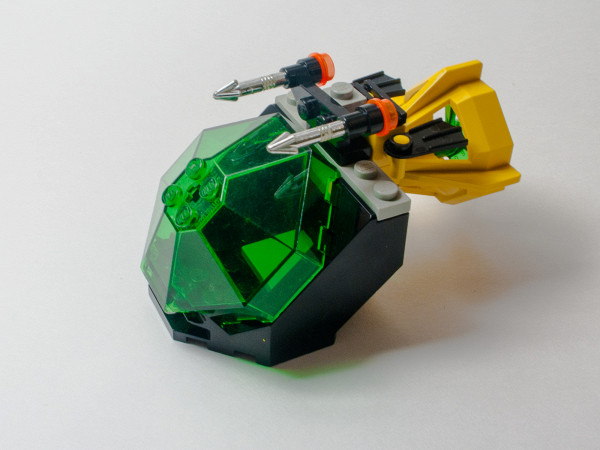 Minifigure is seen through the glass, also we can see absence of any controlling device. So may be in future everyone got voice control like Iron Man's Jarvis.

Or "Siri, go to that cave, Siri not to the wall, not the wall" .... decompression sound, interference, and lost signal .... 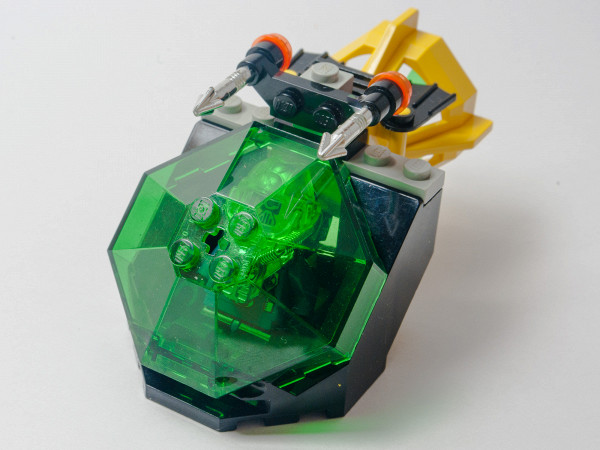 Another interesting fact, unlike the 6125, there is no manipulator/servo arm for crystal holding in this set. So do get crystal, Crystal will need to go outside. Also there is no place to store the crystal. Crystal container from bigger sets won't fit into cabin. Also this set doesn't get a crystal. Maybe someone can explain me, why all Stringays set got crystal, but allegedly called "crystal miners" hydronauts not.


So we can make a suggestion that this solo sub is just intelligence device. 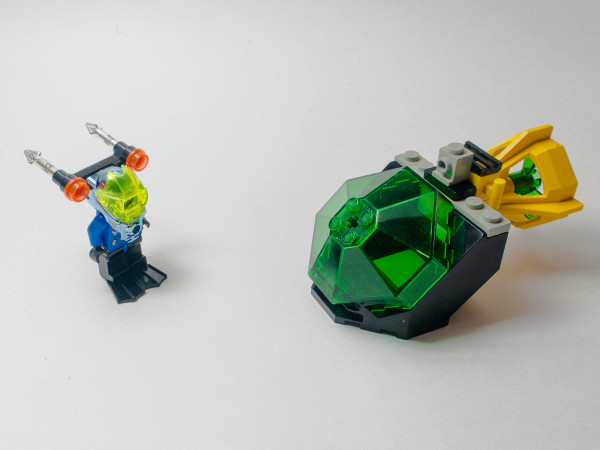 This model can be called underwater jet stool :) Or some sort of scooter. Alternate models for other small sets like 6100 for example, also doesn't look good. I think LEGO designers like underwater stools very much. 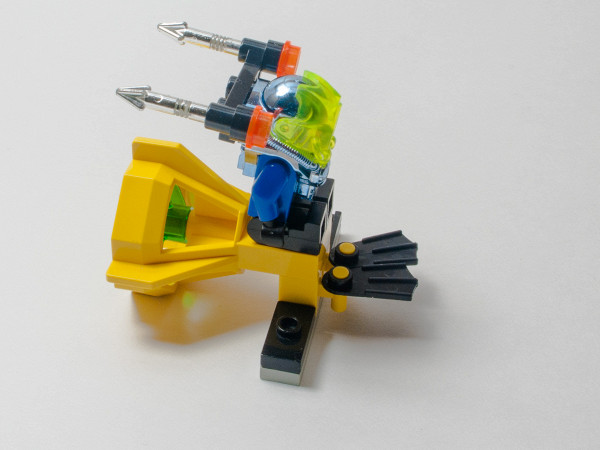 This is transport for so small hollows, where even solo sub can't fit. Harpoons look strange, and we get frontly attached flippers, like in mentioned above 6100. 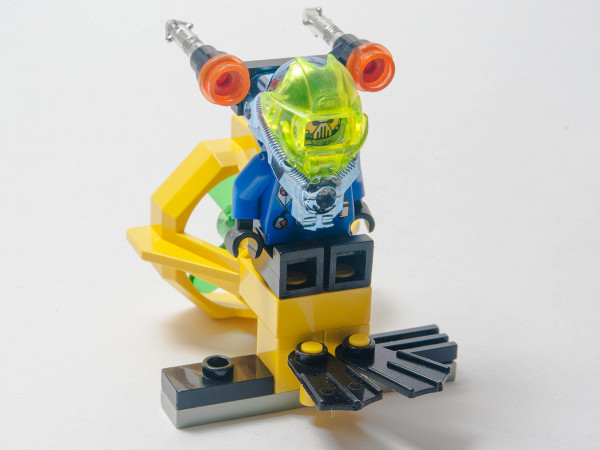 No control device, again, they could put a simple single brick before the hydronaut. This is so strange. 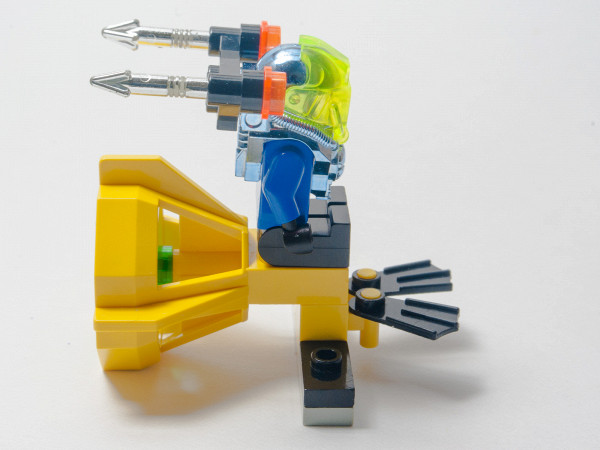 Propeller is the same, because there is the only way to attach it with the parts we have in this set. Altogether this alternative model looks very strange. 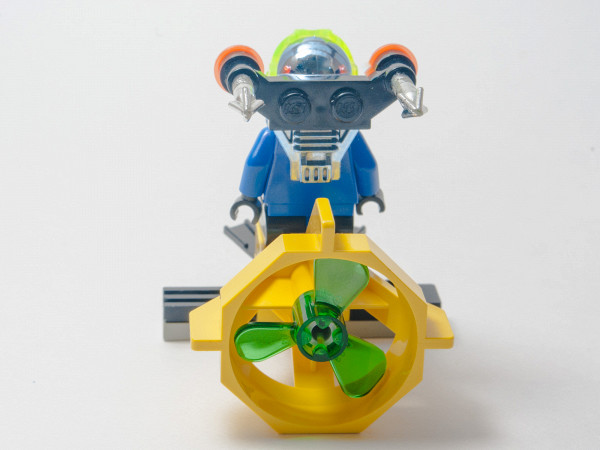 
So we have come to conclusion.


Set and minifigure are pretty interesting. We have no clue that it is heroine not hero, only the mention in LEGO Mania, so we can treat it as spherical minifigure in vacuum. Face with such mask can fit many scenarios, it can even be used to make minifigure size Bane. Helmet is different green from any other green parts, it is strange, but chrome armour is awesome, as always. More Chrome to the Chrome Throne! Windscreen is of interesting colour, and will fit nicely in space and underwater MOCs. May be it will look fine for UFOs. :) Modern set with such price can be called 30349, or something similar to it, and you get what you pay for. Generally you get more parts, but most of parts in this set are pretty big, and they will interestingly enliven your MOCs. Yes, as standalone set, it give you not much abilities to build something, it is easily seen from alternate models, but with right lighting it could look awesome on the self. For example Dodma has made lightning for 6109 here.


So i think we can stop here. Wish you a merry LEGO.

P.S. Found good video review of this set by Jangbricks
Share it