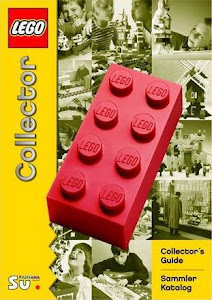 New version of every LEGO Collecor's Deskbook has been released this July. Meet the "LEGO Collector's Guide, 2nd Edition".

The biggest difference from the previous version is the amount of sets listed and the covered period. New catalog cover set released in 1949-2011 years, while first edition only contains sets released in 1958-2008 years. New catalog has been improved, missed images have been added, image quality also has improved. Although catalog still has spaces. But it already helped many LEGO fans around the world. Thanks to it we now know about two new sets:


As a bonus you will receive a key chain with the book, that was released especially for this edition. Premium edition of first release was bundled with unique minifigure.