Share it
Today we will review strange set with strange story.

This set was released with different numbers for different regions. It was pretty usual that time, but in general regional versions had some bonuses. 1728 had seabed, 6109 got giant ray. This set contents were the same in all regions.


First time it was released under number 6100 in 1998, second time as 1095 in 1999. 6100 called Aquashark Dart , 1095 has been renamed to Super Sub (What is super about it? ). And so the strange things begin. First set wasn't associated with any theme, but if we look at torso we can easily distinguish it as Aquasharks. But there are some moments that doesn't make it so easy. Why it just can't be easy? Headgear and airtanks are not similar to the ones we can see in Aquasharks theme, furthermore Aquasharks were released in 95-96, so releasing "impulse" set in two years after theme ending is pretty strange marketing move. In Russian LEGO catalog for 98s in listed on an "impulse" page set and named as Deepwater Scooter (What the hell? Or do they think it is how super sub should translate in russian?)


Set with number 1095 has Hydronauts logo in the corner of the box. 6100 also very close to Hydronauts set numbers (i've published review of small set 6110 from this series before). But this set has another gear and colour gamma, so it shouldn't be in Hydronauts, no way. Aquashark logo on torso doesn't help either. So most listings treat this set as Aquasharks one. I will treat it so as well. It seems that Aquanauts vs Aquasharks conflict hasnt't went well for Aquasharks, and this set shows decay of the last survivor.

I got this set without box, so all box images are from the web.
Front side shows complete set, as usual, if it wasn't so, i would be first to astonish.


Back side shows us some alternate builds. Interesting, when LEGO stopped showing alternate builds on boxes? May be in 00s. Big title LEGO System. It also has vanished from modern boxes, replaced by big theme name.


Alternate models are pretty strange, but they are always like that, i guess LEGO designers had to work overtime, so haven't got enough time for creating 3-in-1 models for any small set.. 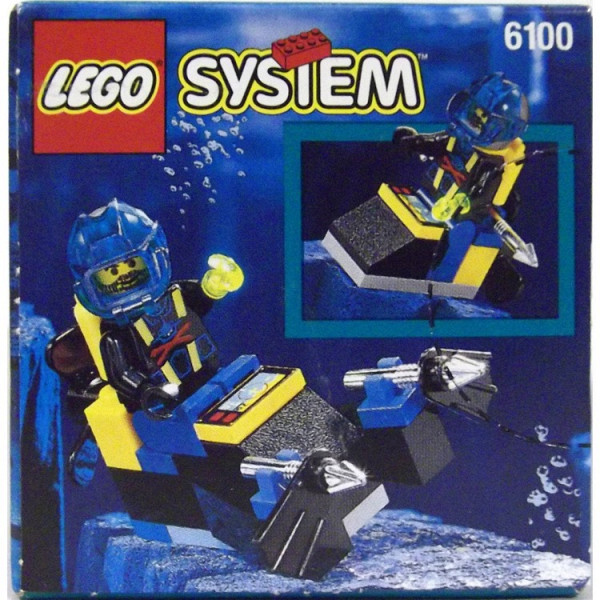 Instruction is pretty usual. One two sided sheet of paper. You can see it here. As expected, for such small set, no interesting twists or building secrets.

Another moment that distinguish it from Aquanauts, Hydronauts, and Aquasharks is black propeller. In Aquazone Black propellers is the feature of Stingrays. 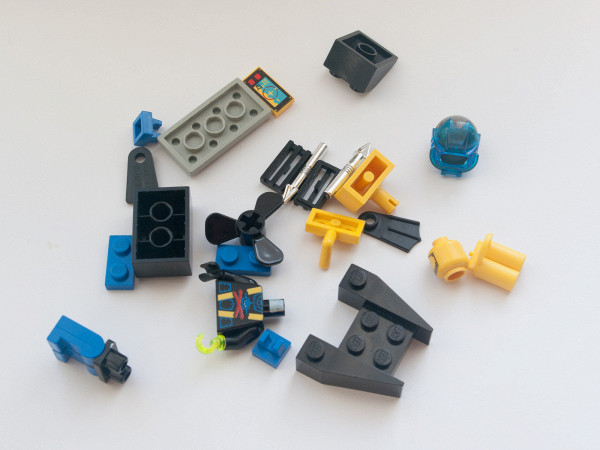 Now to the minifigure - our main protagonist. (if you are the only one, you can be called main :) ) His name is Thresher (OMG he has a name.) He is Aquasharks leader. He can be found in 6135, 6190 and 6104. He is named after Thresher Shark. We are told, that his hook looks like this shark's tail.


Stubble, hook, "red cross and a shark", it is some kind of underwater Jolly Roger. Pirates always pirates. 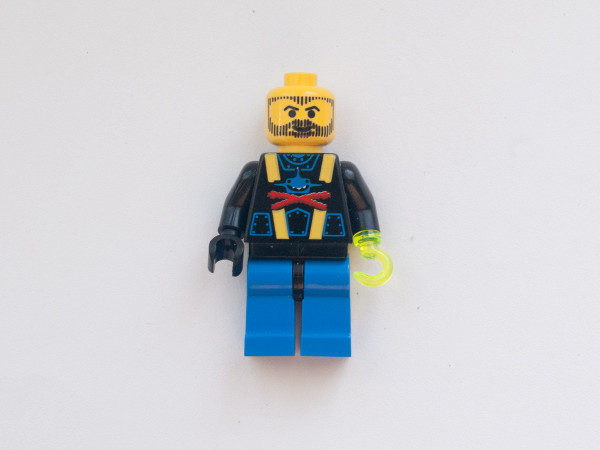 Head, torso, legs are all one sided. It is normal for most sets released in 98. There is exceptions of course, for
example, 6567 got two-sided torso. Legs are blue, but all other sets with Tresher show him wearing black. 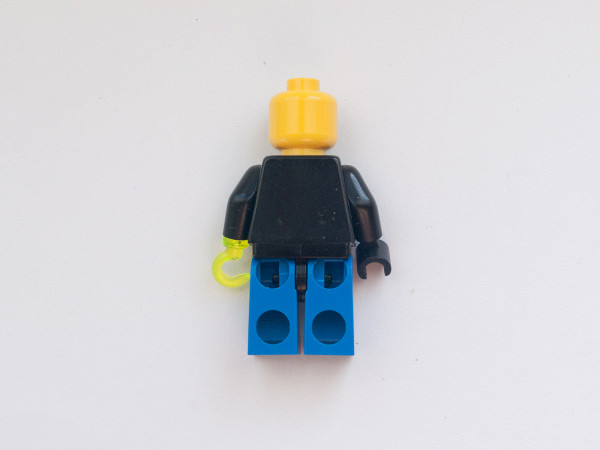 Fully equipped hero. Instead of full Aquashark underwater headgear, we are getting some mix of Space and Aquanauts. 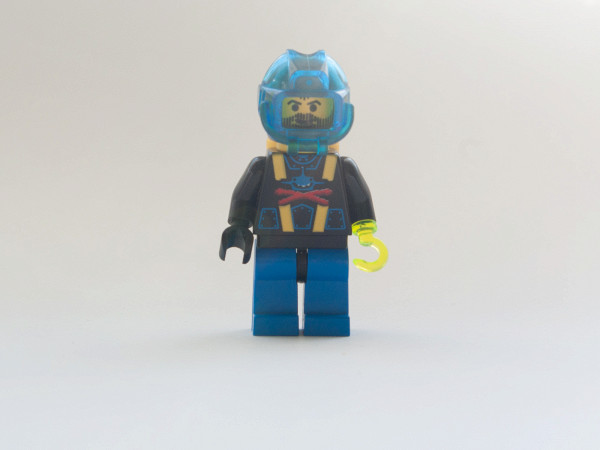 I can't understand why they hadn't used Aquasharks underwater gear, may be they wanted to distinguish it from 6115, but then why they hadn't taken Divers (1997), no, we got Space air tanks, they also appeared as Firefighters' gear, you can even find similar ones in Volcano Explorers. LEGO produce this part from 1978, so it seems that they like it very much. 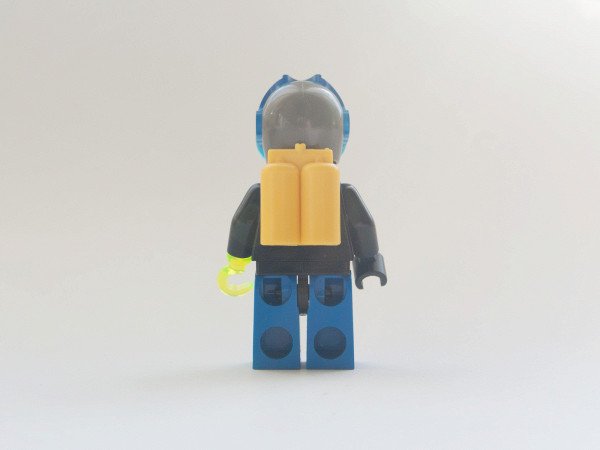 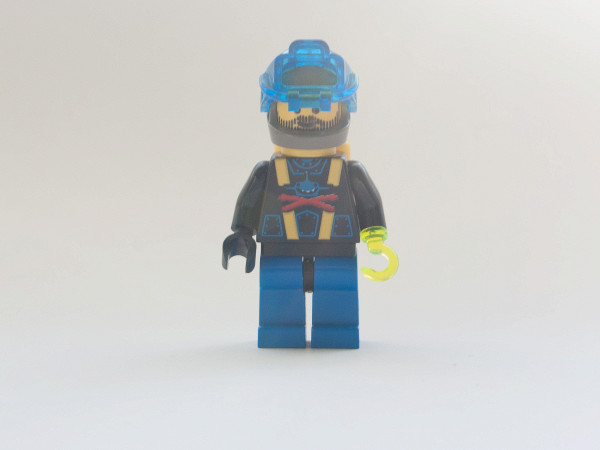 Finished build looks better than on images. Interested seat. In opposite to 6115 and 1749/1806, there is a seat here. Stickers were't so popular back therem so control panel is printed tile. This tile appeared in Aquanauts sets, in 6135 and in ... 7161 - Gungan sub (The real Super Sub set.) 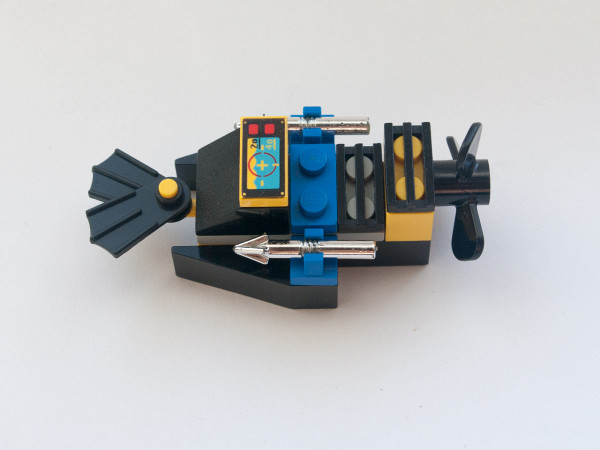 Propeller is placed on the back, and swings easily. Two harpoones are placed on sides. They hold very sturdy, even if they look like shooters, there weren't much shooters years ago. 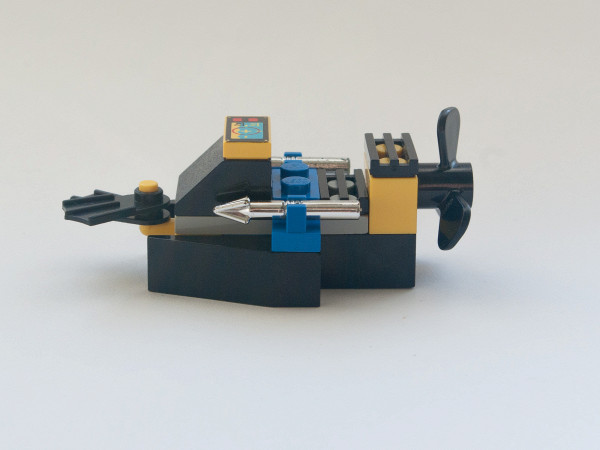 Flippers are stored in the front. In other small Aquazone sets flippers are attached in the back, here diver will need to swim forward, to get them, strange solution imo. 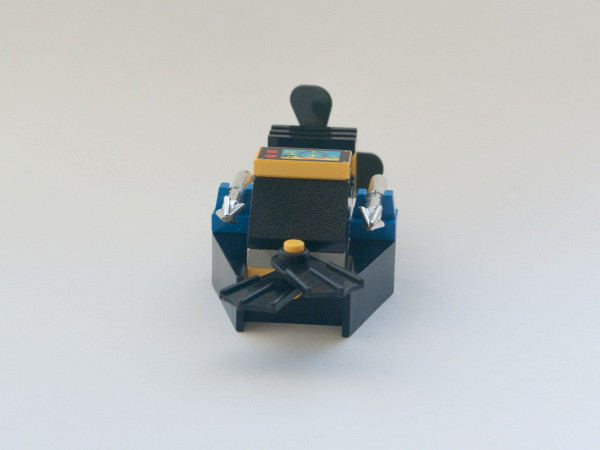 Back view, to see all details. 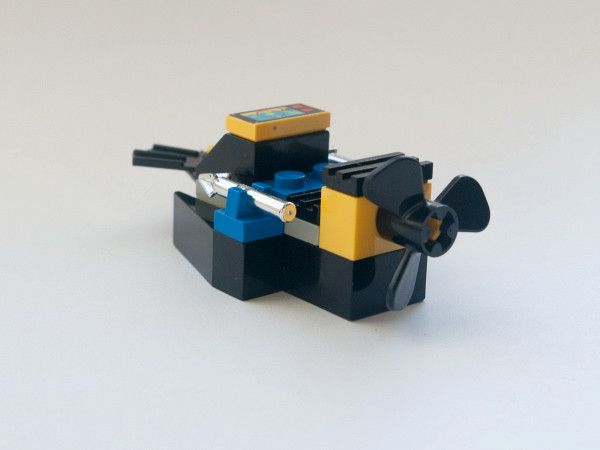 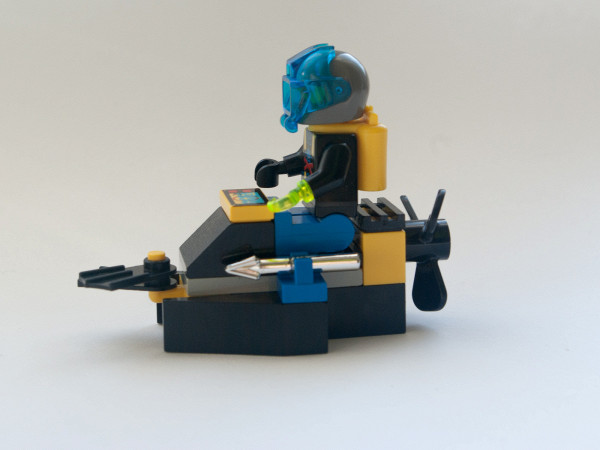 Thresher knows nothing about aerodynamics, so this sub shouldn't be really fast. 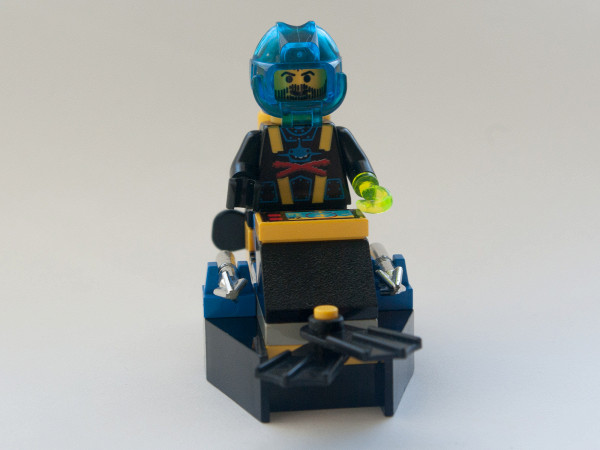 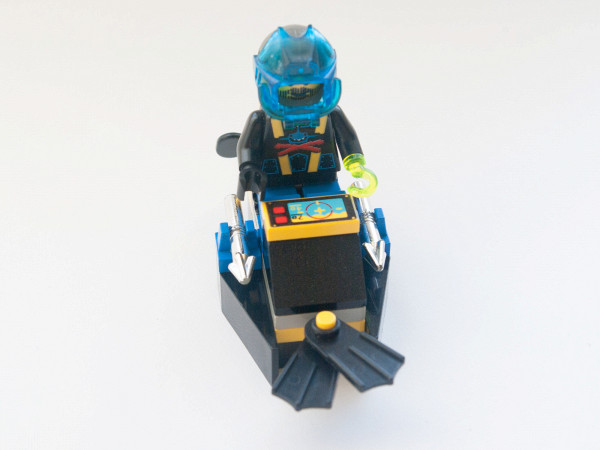 But in the whole it is better that images. 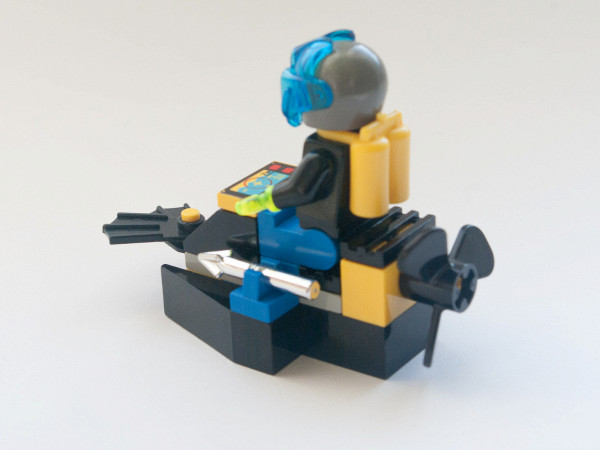 Now we will build alternate models, no instructions, just images, and experience. Everything so easy, that any child can build. 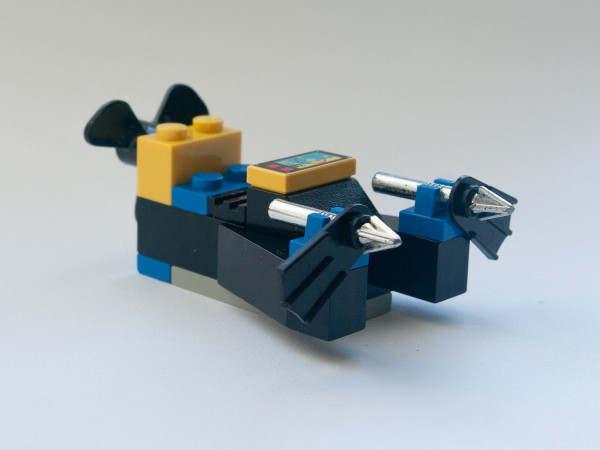 In general everything as before: control panel, seat, propulsion propeller on the back. 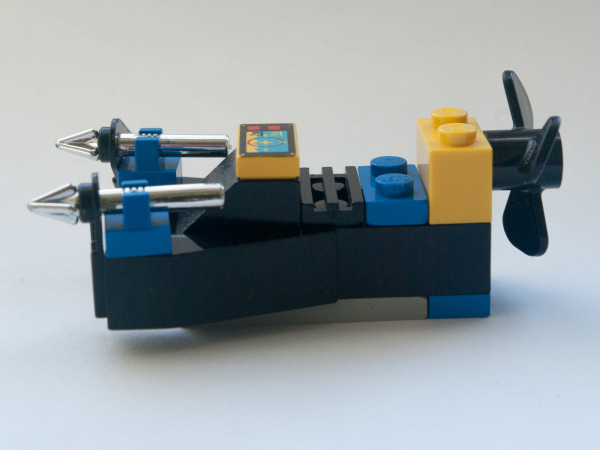 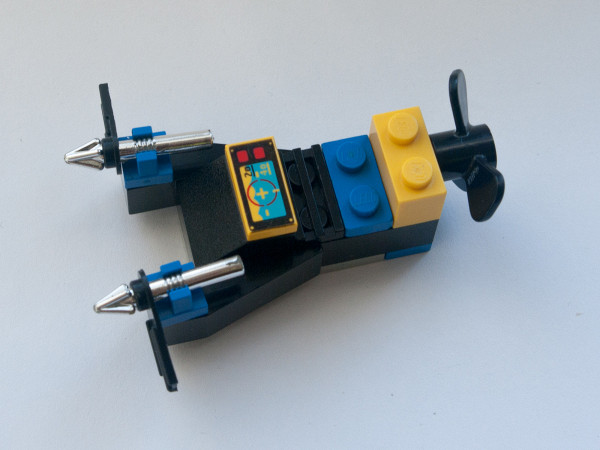 Harpoons now placed on front, but they have flippers attached to them. May be for better swimming :) 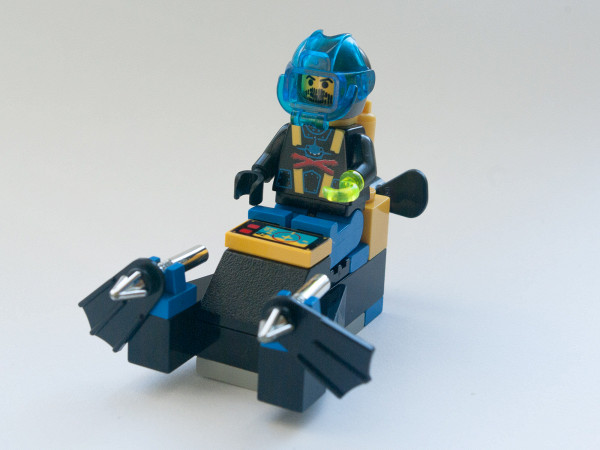 Control panel placed lower, so it will be hard to use it with minifigure hands, i think now it is controlled by feet. :) 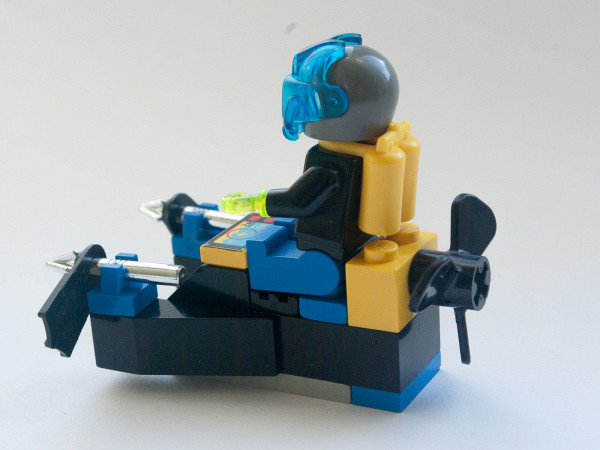 
This build is strange. Just strange. 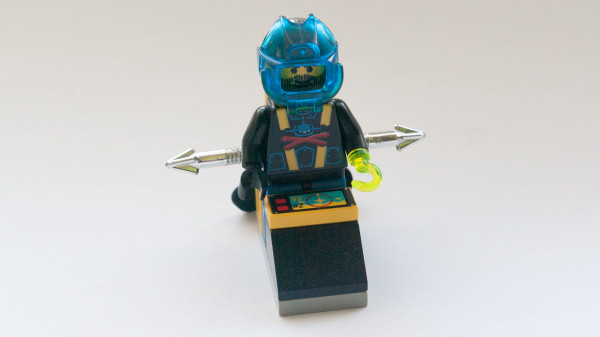 Minifigure stands, because there is no place to seat left. Control panel position similar to that in previous build. 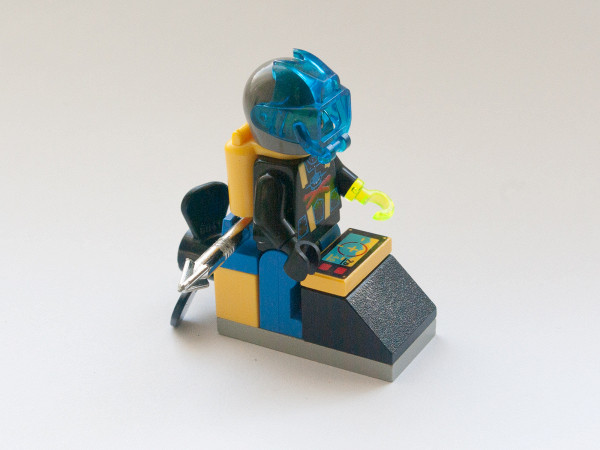 IMO, most strange model. They done it for checkmark, we have two alternate models. Designers imagination often exhaust on last alternate build.

Here is comparison of this minifigure with classic aquashark minifigure. The difference is easily noticed. 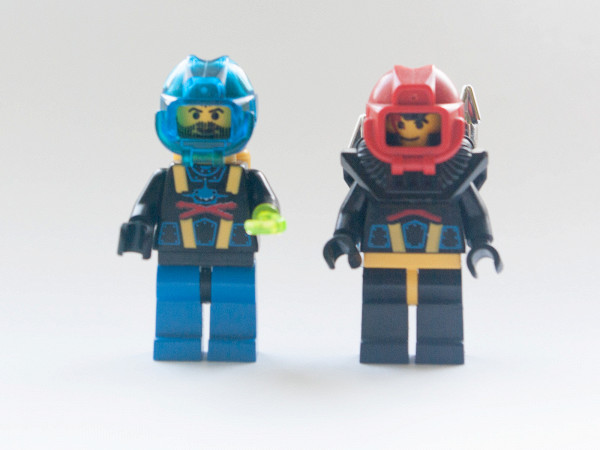 As a result, this set not as bad as i thought about it. It is not typical, it is really strange. It looks like it was made from spare unsold parts. Legs from Hydronauts, head and torso from aquasharks, aquanaut visor, racer's helmet, firefighters' air tanks.
And as icing on the cake, we got strange model, built with one rule in mind, "we need less parts". But LEGO designers are great people, so even in such conditions they have made pretty interesting set, that have a story.
Share it