Share it
Let's continue Nexo Knights reviews, started with 70332. Today at Bricker, we have a special guest, Lance Charming (in fact his family is Richmond, but i'm pretty damn sure we can call him Prince Charming). He is a knight and he is called Lance, how interesting, tell me more ... :)


As a source of Lance we had a set that is rarely reviewed. It is Magazine Promo numbered 271601.


Magazine promos are available in packaging that is much, MUCH bigger than their contents, and worst of all, we doesn't get health "dutch air" in them. ^_~ This packages are resealable, not as ordinary polybags — these can easily be opened and then sealed. So you can never be sure that you are buying really new one from Bricklink. Also they are not transparent as ordinary polybags.

By tradition package has two images: Realistic and small, and big beautiful lying one. So if you were rubbing your hands to get a Nexo Power Shield, beware. You will get only Lance, lance and a meal. I don't understand, why Lance is getting a meal, there should be Axl. May be if we put a meal and Axl in one bag we will end having only Axl? ^_^

And again we get a strange scale part. A Goblet. Everytime the chosen part shows how miserable the package contents are. 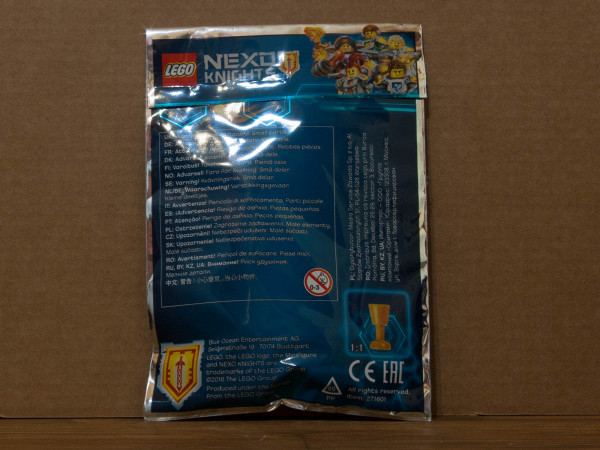 We had a plenty of pieces for a promo. We got 8 pieces + armour + minifigure. 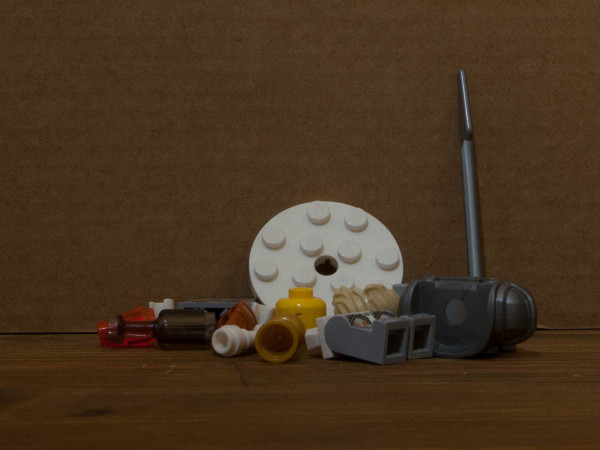 Torso is ordinary for the Nexo Knights series. In the middle there is a hero trademark. Lance's trademark is horse. (i think this is reference to Medieval Tournaments). His first emotion is smirk. 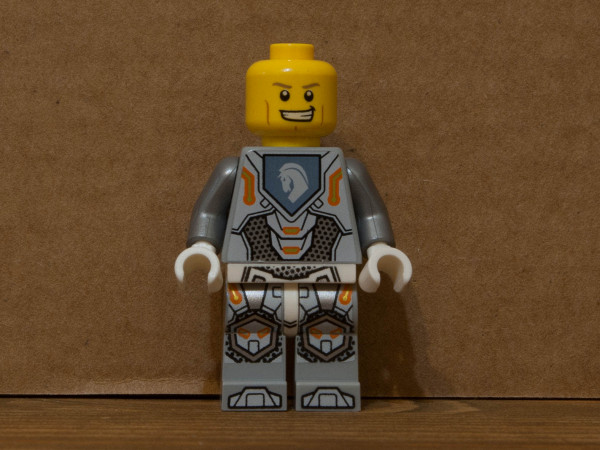 Face is two sided, with happy wink on other side, it makes Lance more Charming. :)
Legs are without print on the back, torso's back have print of exo-suit on it. 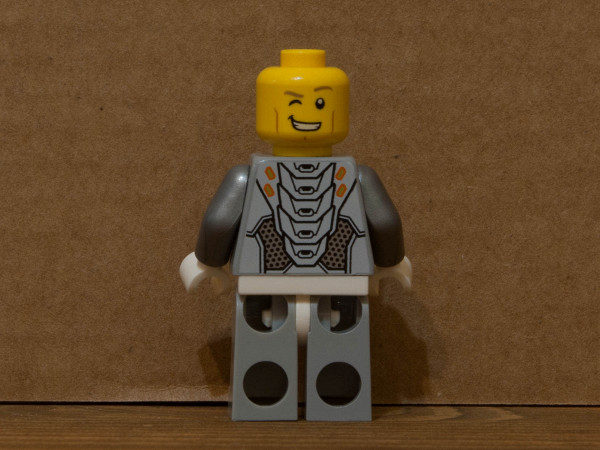 Instead of helmet we get a hair. This is very rare, because in all sets Lance has a helmet. Armour is Flat Silver, not very ordinary colour, but it will be useful for MOCs. 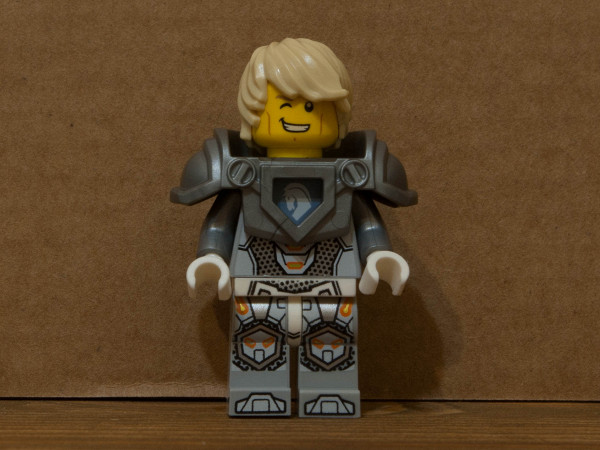 Armour and hair completely hide second face. This is good, because sometimes we get a face showing under the hair, for example it usually happened in Exo-Force sets.

What i like in Nexo Knights armours is the ability to put anything you want to armours back, it gives you many possibilities. 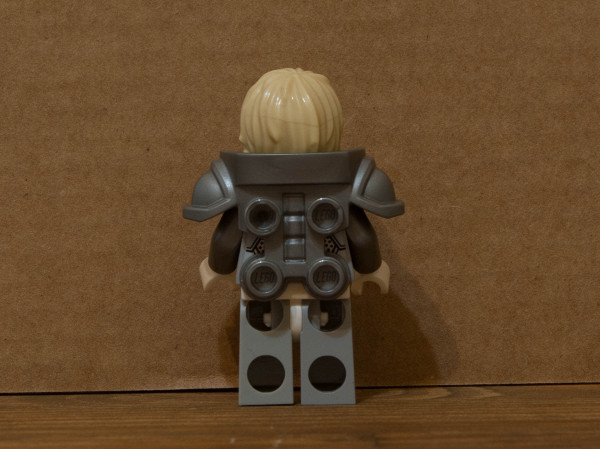 In this set you will not just get a minifigure, but a table with a meal. A trans-black bottle that contents could easily fit in goblet (omg I have a LEGO Bottle finally), and you get a croissant. I was never understanding the size of lego food, and croissant is also big. If Lance is keeping track of his weight he shouldn't eat it. (May be such big foot is reason of LEGO minifigure proportions) 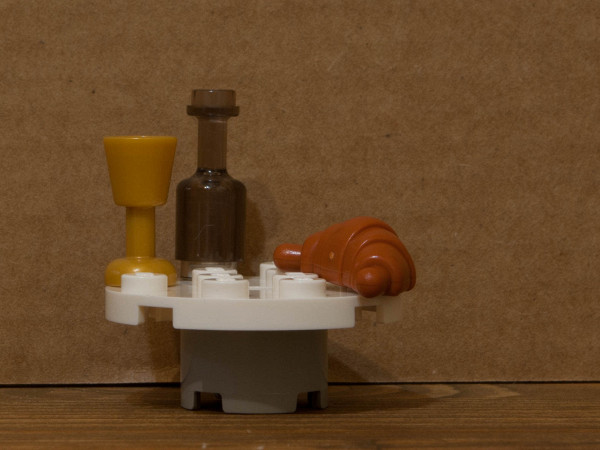 LEGO were very generous with this promo, there is also a lance in it. Don't know details, it is either energy or reactive. 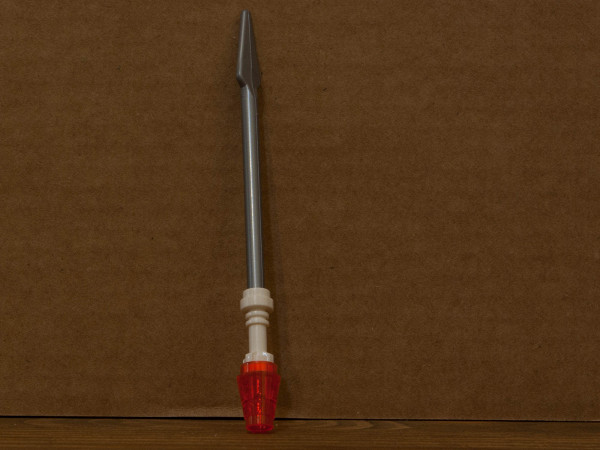 To conclude this set is pretty good mini-set, like the good old "impulses". The setup in will look nicely in some castle interior. Anyway i don't understand why there is lance in it. It isn't a fork, so it isn't easy to eat croissant with it. 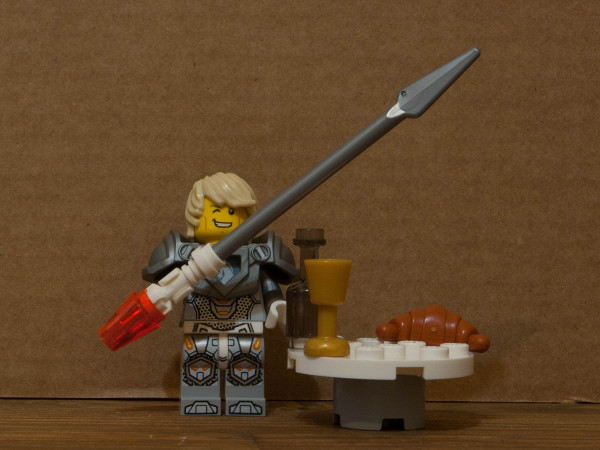 So for this set Limited Edition is truly is. If i'm not mistaken Lance with a hair is available only in this set. So if you want to rebuild a classic fairy tale with a bit of sci-fi touch, or may be make a MOC about Shrek, you should get this promo.
Share it