Share it
After reading an interview with one of the LEGO set designer about Nexo Knights, i wanted to make a review about the small set from this theme 70332 Ultimate Aaron.
This is one of the "accessories" sets and includes minifigure, small amount of parts, and a set of accessories. Similar sets were massively released by Megabloks in their HALO series. For example, set 96838 released in 2010. Small platform, armory, and some accessories, figure. Long ago LEGO released sets based on this scheme, they were called "impulses", for example, old 5900, unfortunately this type of the sets has disappeared, replaced with collectable minifigures. Though this set has much more pieces than any "impulse". It's numbered 82. Let's find out what is waiting us inside.
We will start with set clothes. Box.
Box is a carton with sliced angles. It is similar to the ones we can see in Bionicle.
On a box we can see a bigger image of the main hero of this feast of the life - Aaron Fox. In the distance you can see the set itself. Also, there is a list of Nexo-powers for scanning, and note about including a free app (app is free, never less of you own the set, also i despite struggling could not make it work on ipad mini retina).

On the back side we see another image of the set, and small instruction "how to scan NEXO Power".
Also there is an image of small green brick for a scale. Why it is an unseen brick, not a shield, or minifigure. Also we can see a usual notice about small pieces danger. I hope i won't swallow them. 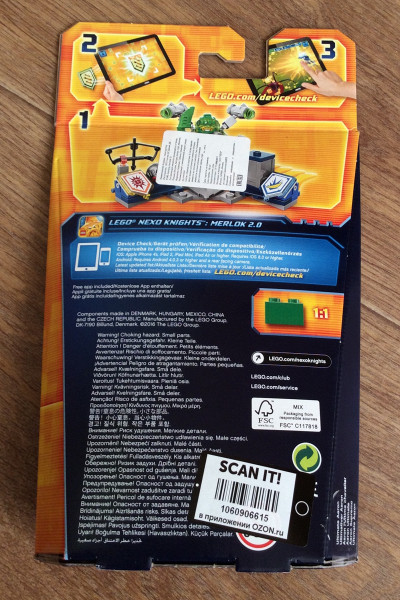 Barcode is hiding in the bottom of the box.

Box contents consists of two un-numbered bags and a small instruction. Bigger parts are in one bag, smaller in other. 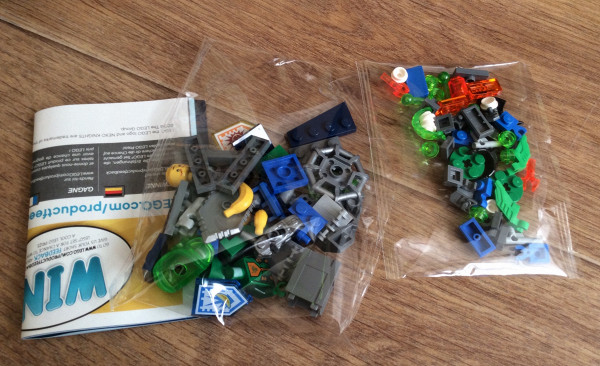 Set instruction is available on official LEGO website, so i won't stop on it. There is nothing special in it. For 23 pages we got 7 pages of adverts, but i think nobody will be astonished by that. (many modern magazines have 50/50 ratio). 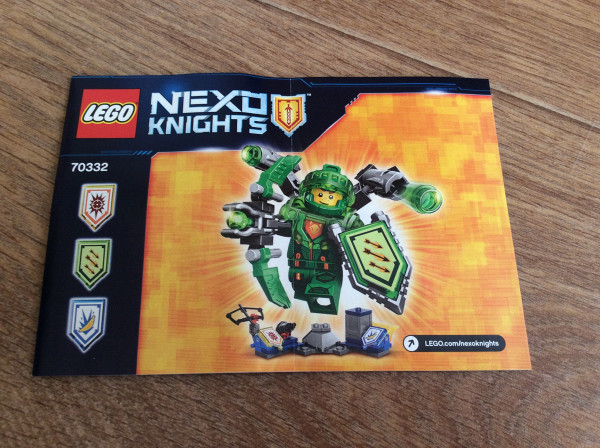 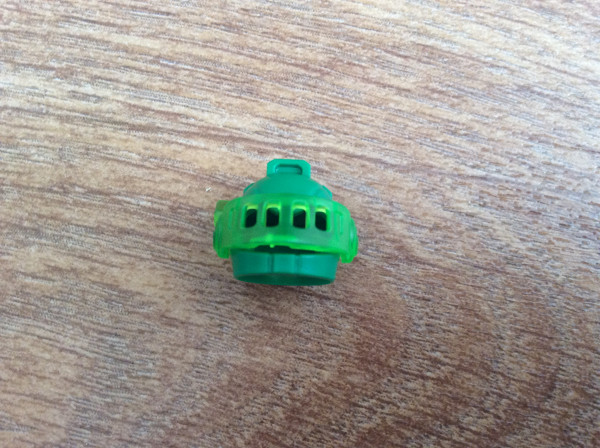 Building was mostly usual, the only question is this transparent part. 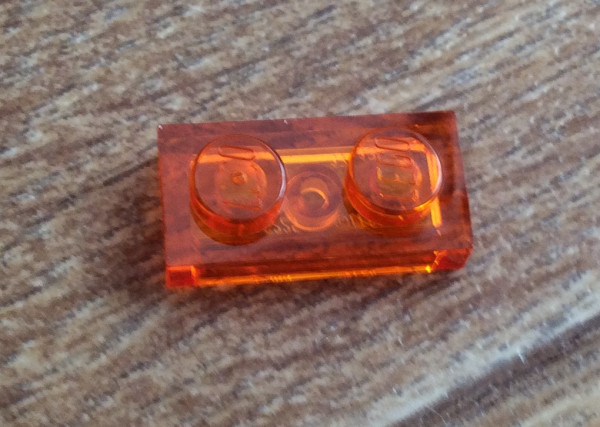 Why is it transparent? Shouldn't it be blue? No answer. Anyway it will have a place in my part collection. I doubt that anyone will keep this platform. 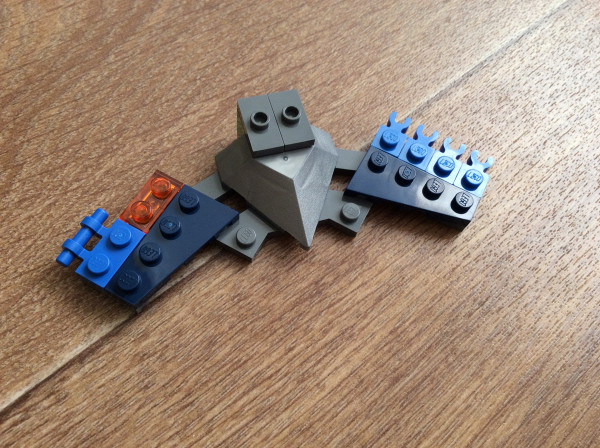 Firstly we are instructed to build a crossbow. A very huge crossbow. Its size compared to the height of minifigure. Such crossbows (close to ballista size) generally were placed on a bipod. But Aaron is a here like Arnold, so he can hold weapon of any size. Crossbow is shooting with a usual lego shooter mechanism. Crossbow bolt is of transparent green (Арбалет стреляет с помощью механизма известного уже, наверное, всем. Арбалетные болты ядерно прозрачно зеленого цвета. (i think Non-Proliferation Treaty doesn't work in Nexo Universe) 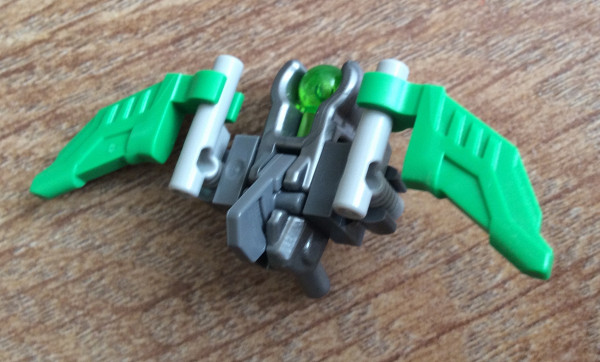 Now we will continue to minifigure. Besides the new helmet we get a new armour. Heroes torso has his logo on it: Fox face. Hero's eyebrows are not seen in helmet. 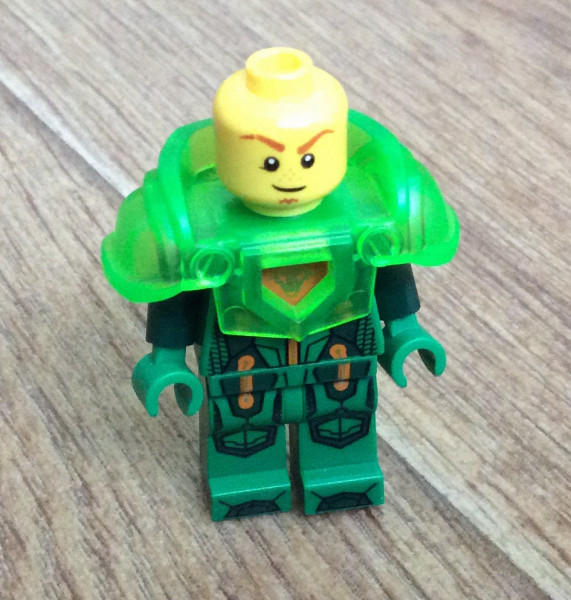 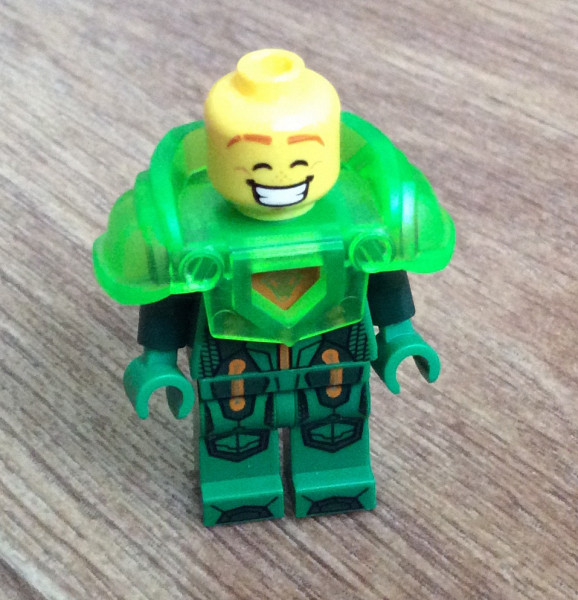 Torso also two sided. I think Aaron's costume has some muscle amplifier in it.

Visor not fully closes hole in helmet. Shield is big and can save hero from many problems(but not from boredom). If hero is always takes this shield and crossbow he will have a pretty good musculature. On a shield you can see a Nexo-powers. (In fact they are downloaded to shields, nexo world seems less logical for me than one of ReBoot) 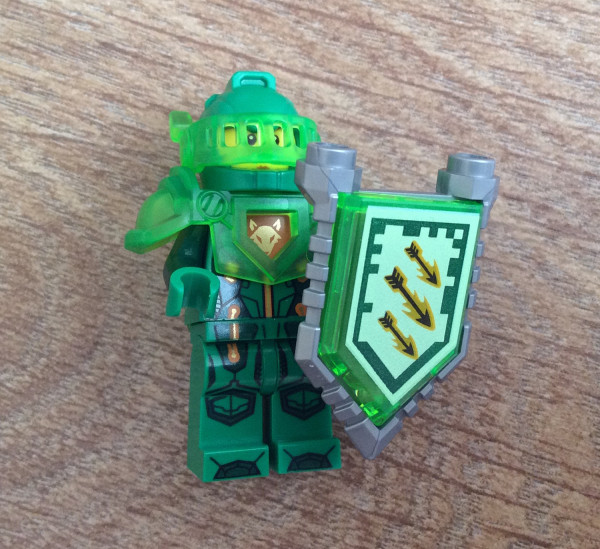 Now hero is complete. We have added additional shooters to it. First power is "Arrow Strike" 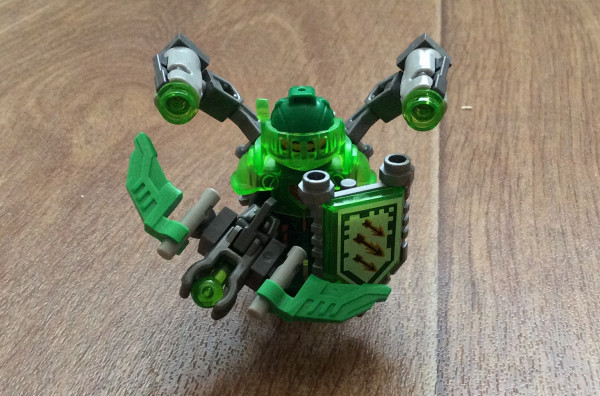 In the end there is a holder for additional crossbow bolts. 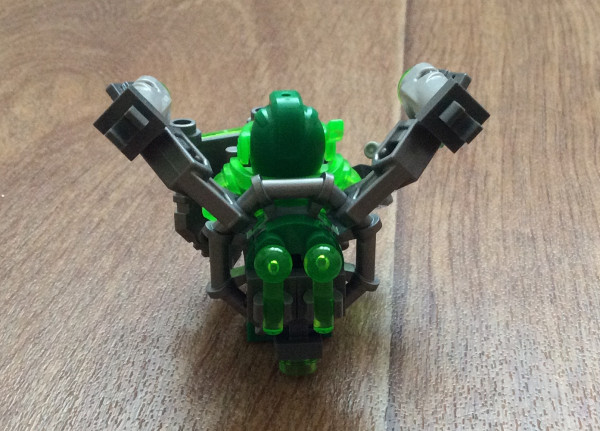 As we see it isn't just additional weapons, but a jetpack, so Aaron can dominate across the battlefield.

There are some interesting thoughts about it, if hero is flying and has a shield in one hand, how will he reload a crossbow? Even if he could, taking bolts from behind would be a hard job. Don't know what can be compared to such a monstrous construction. 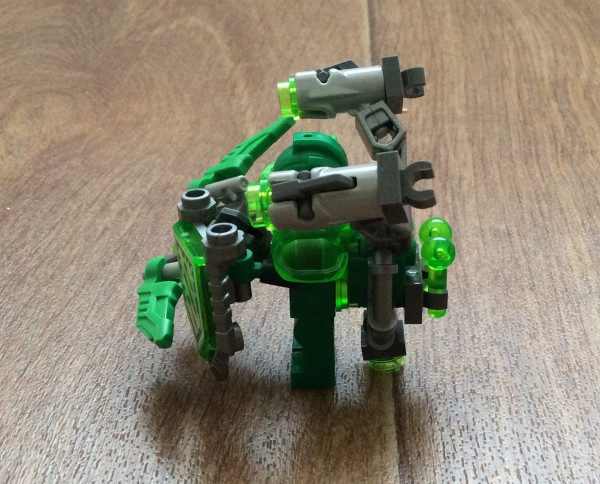 So the set is setup. We got a platform for our hero, and two weapon stands. Unfortunately you couldn't place current weapons on stand. 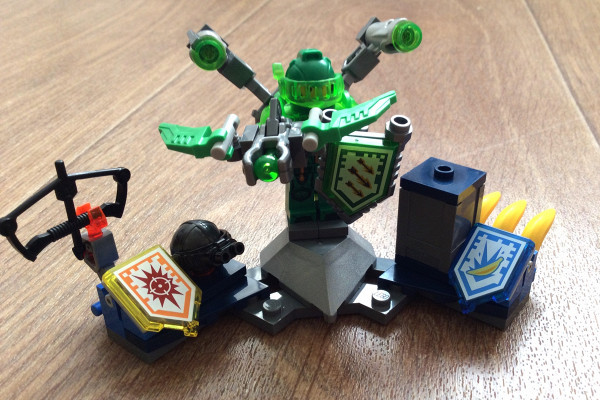 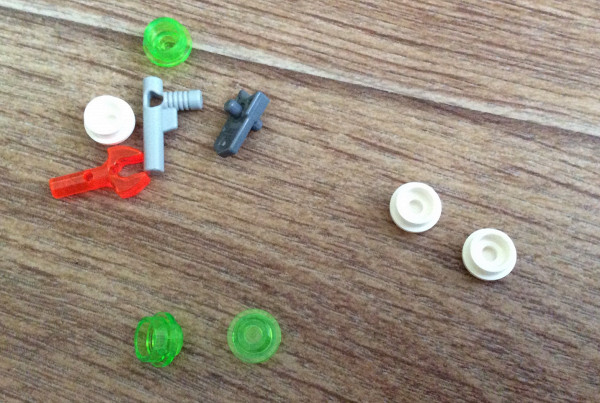 Aaron likes his outfit. :)
What power you should have to be happy to wear such weight on your back ? Only turtle power NEXO-power. 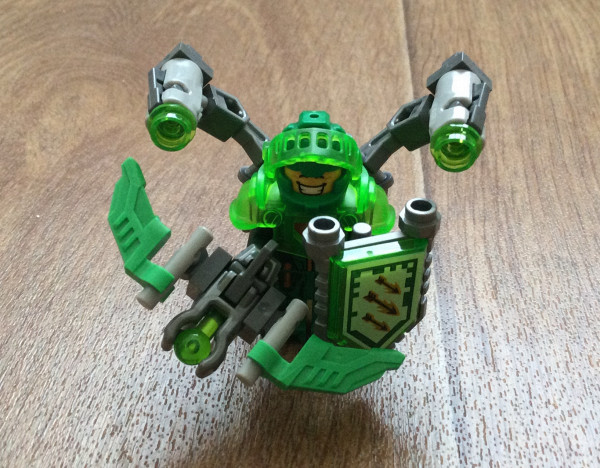 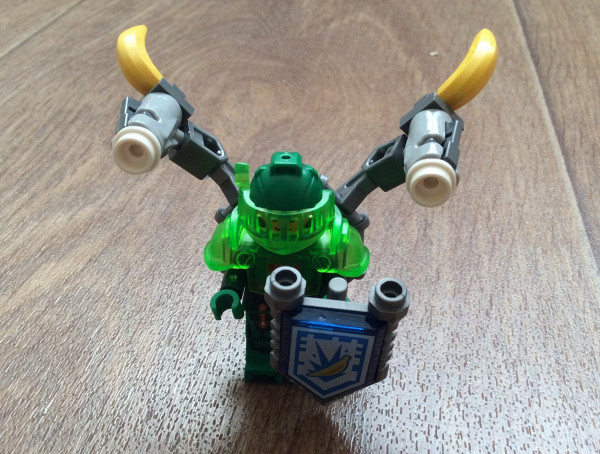 Don't know why, but third power is "Target Blaster". Heroes takes ordinary arrow and night vision goggles that we have seen in LEGO Movie and Ultra Agents (also there was in TMNT's 79117). In the current Nexo line this goggles available only in this set. 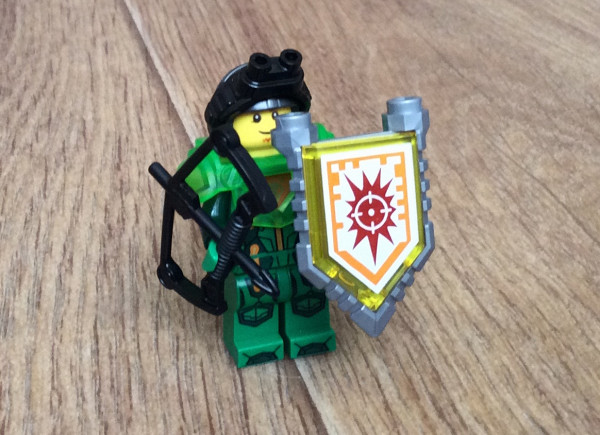 We could try to mimic official LEGO image of Aaron with this set :) 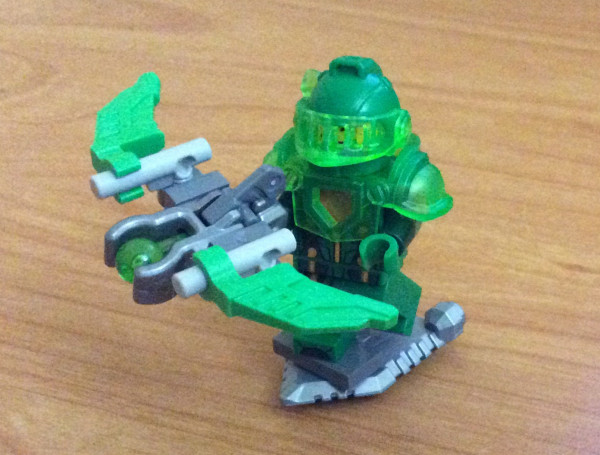 I think this set is a good accessory supply. But imo 5900 was much interesting as accessory supply. New armour, new helmet, new shields. Not so bad for a small set. Pricing is similar to the ones in Starter sets like 70310 or 70311. The only ways to get Aaron in the first line of sets were this set and 70317, i wasn't ready to buy fortress, and didn't want to miss Fox. Also i like the colours of this set.

All heroes of this theme could be find in "accessory" sets like this, or in bigger sets.

If you buy set for a child, i think it is better to buy a playset, because this set has no play idea, or enough parts for a construction. Of course you can shoot at everything you see, but it is very hard to hit a target with it.

This line of sets is helpful if you want to complete your collection of Nexo Characters without buying a bigger set. Or if you want to get more accessories. But in that case maybe you should check 70335 Lavaria.

At the end it is mighty set. Leave your opinion in comments.
Share it