LEGO is not going to be behind everybody, os it very carefully looks at world trends, and it wasn't a surprise that they came up with diffent iOS apps. Today we will review not very new application, but it doesn't make it worse, so here it is - LEGO Minifigures.
My first impression was slightly negative, but after looking carefully it has switched to positive one, because in this app you can feel LEGO spirit. 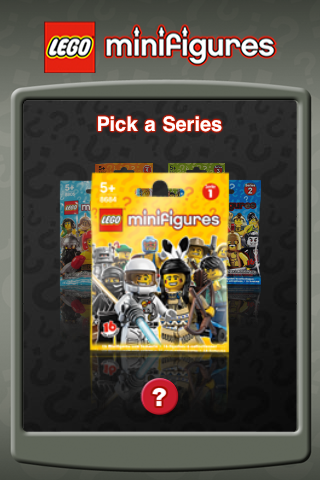 Everything begins with the series choosing. Now only 5 series are available, but i'm sure as soon as 6th series will be released they will push update. At the bottom is the help icon. 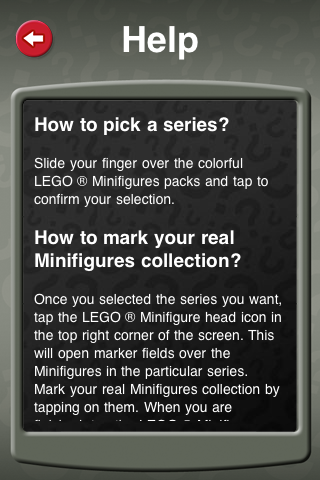 Instruction describes things that are easily could be found out just by clicking other interface, so it's reading could be skipped. 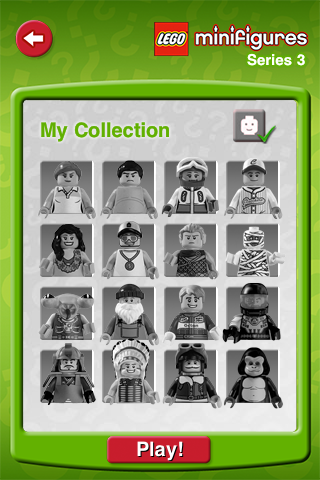 Series are shown as 4 rows of grayed out minifigs images. In the top right corner you will see grayed out icon with minifig head, and colorful "Play" button. 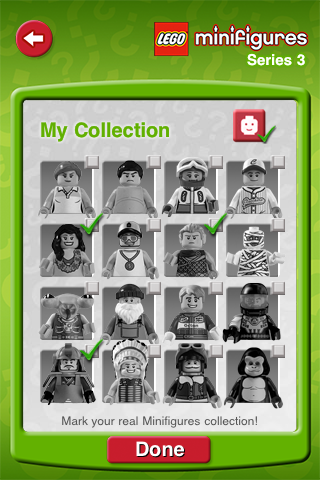 Minifig head icon switches between two modes - playing / editing collection. In edit mode play button disappears and checkboxes appear near all mininifures. Unfortunately LEGO thinks that users do not need to track amounts of their sets, so you could just set do you own it or not. So if you want to track your collection than may be you should look at other app, for example Mini Collector, but it has some other big disadvantages. 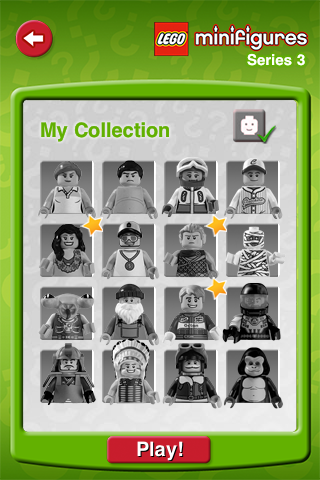 I was astonished, that minifigures in your collections are shown by star, but still are grayed out. I was hoping they will become colorful, also check marks looks better then stars. So i pressed "Play" to find out how to paint minifigs. 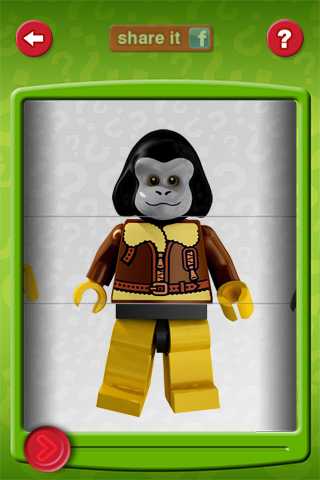 Play mode is consists of three rows. There are minifigs heads, torso and legs. 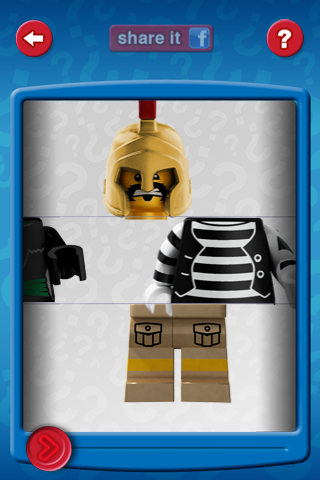 By sliding handle (in the bottom) we start minifigure parts rolling (Hello goes to "One-armed bandit"). 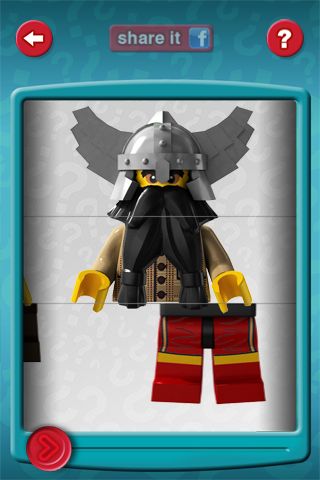 Game play is very similar to rotated by 90 degrees "One-armed bandit". Although there is no stakes, and minifigure parts instead of bells and cherries. 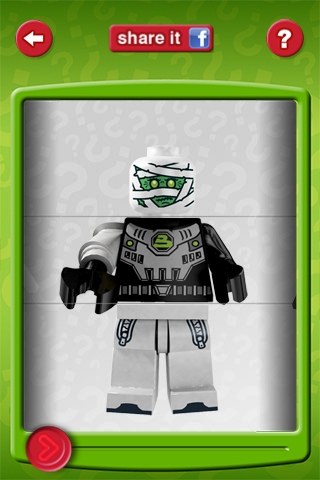 Really silly combinations are very rare, mostly very interesting, hilarious or astonishing. Sometimes you just want to rush to shops to get the required minifigs. So there is no losing in this game, you will always get something interesting. 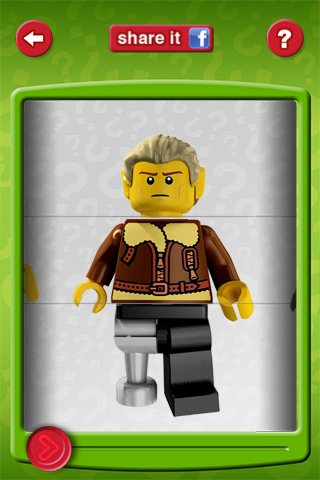 And this is the main reason, why this game is much better than many other minifig utilities that could be found in App Store. This is LEGO spirit, combine simple parts to get something wonderful. You could even be shocked that you didn't realized yourself that this parts could be tied so. And the only limitation is your imagination.

Most mifnigs are crazy mashups which brings you to the world of dreams, imagine the world where the come up minifig could live in. Your imagination create a world, history, character and adventures for each minifigure.
You could share each minifigure on the facebook, but there isn't any favorite album to add them to it. 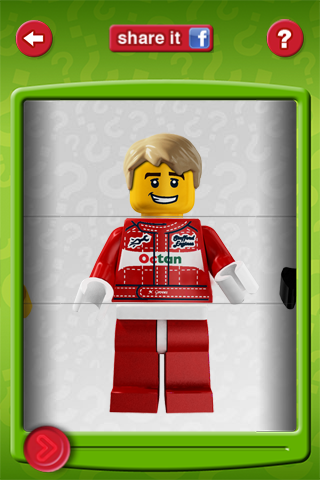 So of your compare the trip of your imagination with the game goal, game goal is seems to be something uninteresting. You are disappointed that you got the figure you know everything about, that you hasn't looked into the wonderful LEGO Universe. 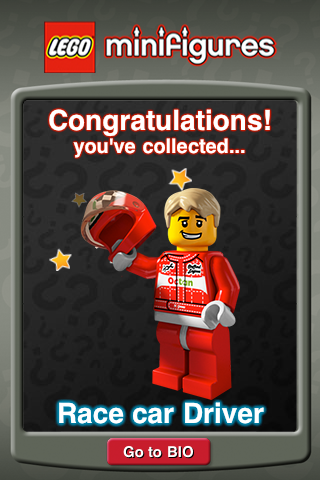 We got congratulations that we has collected minifigure from a collection and forced to go to a BIO page. 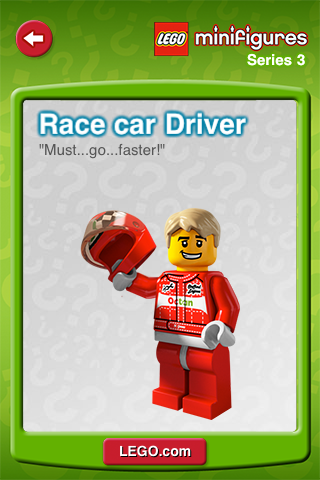 "Bio Page" is very proud name for such screen. There are only a quote from minifigure there, and link to LEGO.com section. Don't know why they couldn't show the description from LEGO.com directly in app. If we go now to the series page we will see that minifigure image has become colorful. 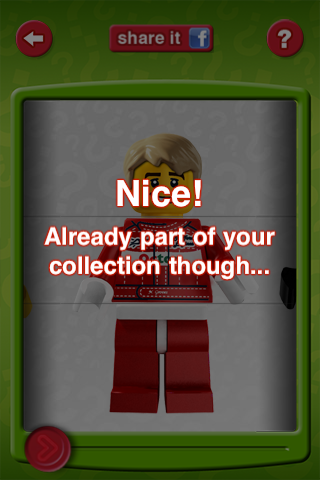 After some time you will be familiar with the message that you have already got this minifigure in collection. 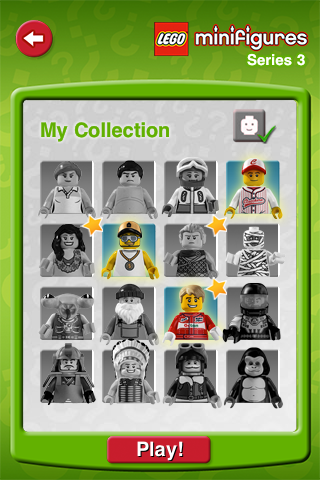 You should try hard to make every minifig image colorful, but for this only luck is needed. If you click on minifigure image you will go to useless Bio Page. 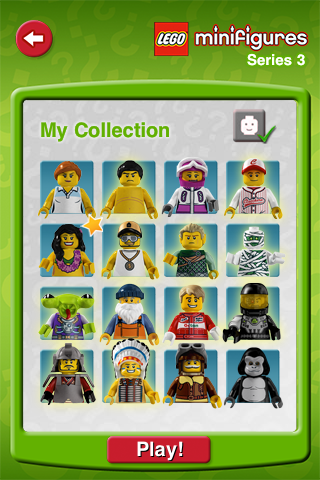 Unfortunately even if you open all collection you won't get any congratulation message or bonus. That was very disappointing.

Not about some small nasty staff. Sometimes after changing collections and pressing "Play!" button app quits unexpectedly. There was a couple of times when app quit without saving changes in collection, although "opened" minifigures were saved normally.

There are things that could be added beside adding new collectable series. It will be great to have a free mode, in which you could yourself substitute parts of minifigures, without the great random. Because sometimes you would like to see how this torso and head will look with other legs, but you couldn't.

Also i would like to see two new modes in games:
Playing only with minifigures in your collection.
Playing all 5 series mode.

This two modes will add much more fun and many new interesting combinations.

This game is great for single player, and for a small company. In both case there are a lot of fun guaranteed, so what more is needed for you?

IMHO this app is must have for any LEGO minifigures fan. And may be it will give you ideas for new interesting MOCs.

P.S. Also you could try to use our web version of app to make inspiring collectable minifigures
Share it