Share it
After reviewing 70906, I wanted to put my hands on another beautiful car, - Penguin's posh car.


In my list of most interesting LEGO Batman Movie Vehicles, this one goes right after Joker's Lowrider, so as soon as I found a discount, I bought it immediately. There will be photos of different quality in this review, photos on orange background is made by Versen, grey background one is by me, I'm not a photographer, so please don't judge me.


Let's begin with some raw data.


We got enough data, let's bring on the action box!

And here it goes: it isn't very big, slightly smaller than one from 70906, but bigger than one from 60134. Box image is marketing lie for everyone who has seen LEGO Batman The Movie. Batman tries to catch Penguin, and throws batarangs at him. Box top is showing smiling Batman, as usual.


Box back side features set features :) Nothing special, but we can look at this great car from other angle. 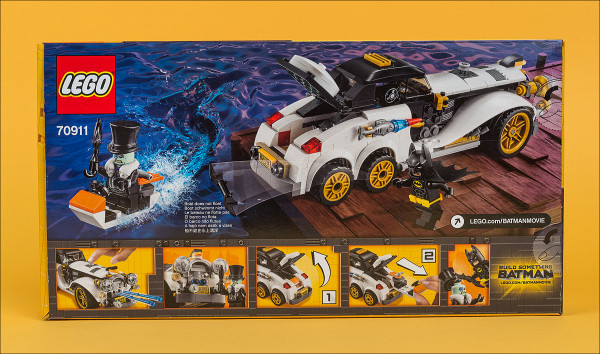 What to choose as scale hint? It is a hard choice, but if you have Batman, you got no choice. This is the way LEGO thought. 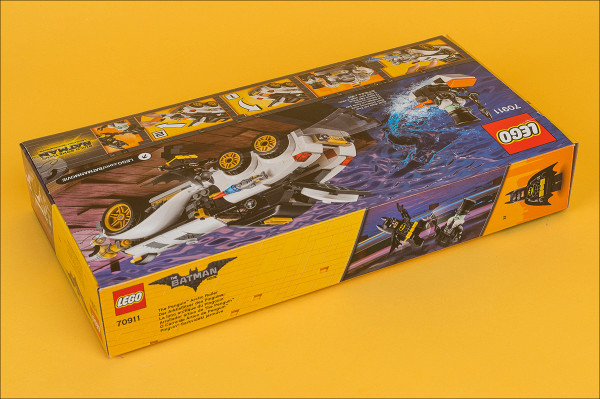 There are two instructions in this set, they have identical image, and useless separately, I don't understand this. Make it thicker, or if you are doing separate instructions, let them have instructions for some separate parts. 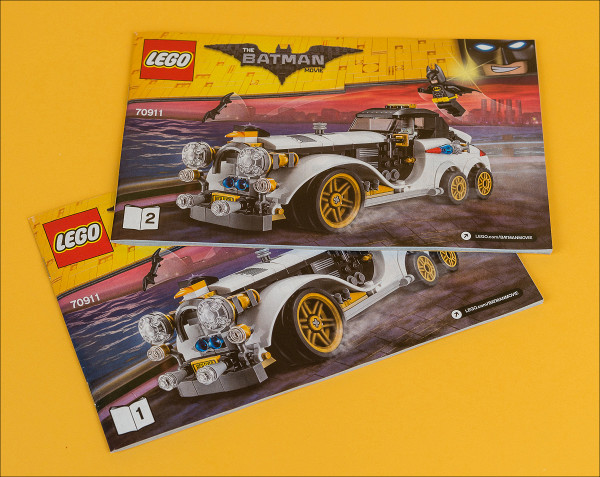 I think talking about instruction is useless, if you want you can look at them yourself. Book 1 and Book 2 are available for you. 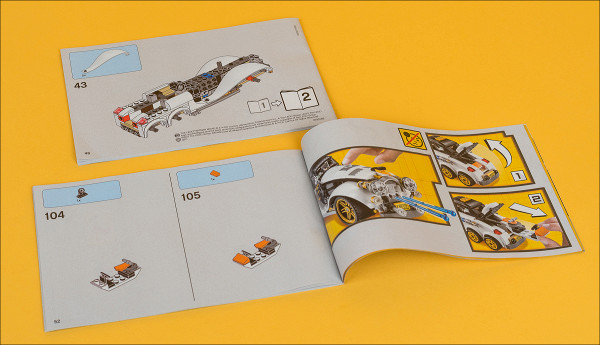 Also we get two half-empty bags with pieces (or according your attitude we can call them half-full), and a small sticker sheet. There aren't many stickers, I'm happy with it. Pieces grouping is strange, because you need parts from both bags for any building instruction. 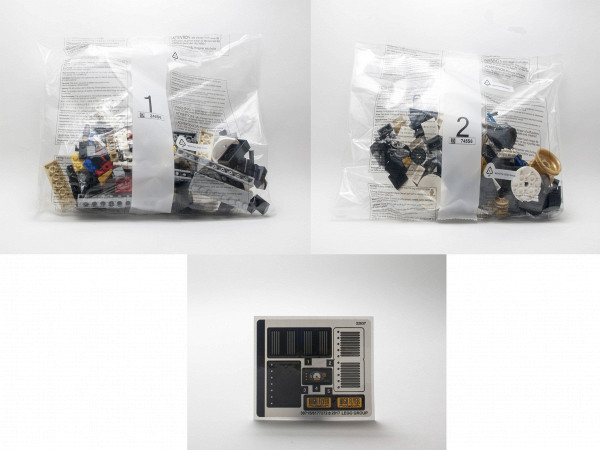 We will skip building process. If you want to see it, you can find great SpeedBuild video on a set page, or better go and buy set for yourself, this car is awesome.

There isn't much extra parts in this set, a pile of small ones in fact, but I think I will find a usage for them. "Shooter charge", batarang, utility belt are common extras for this theme sets, as bonus we get one spare revolver. If I'm not mistaken, this revolvers appeared in 90-s, in Western theme. 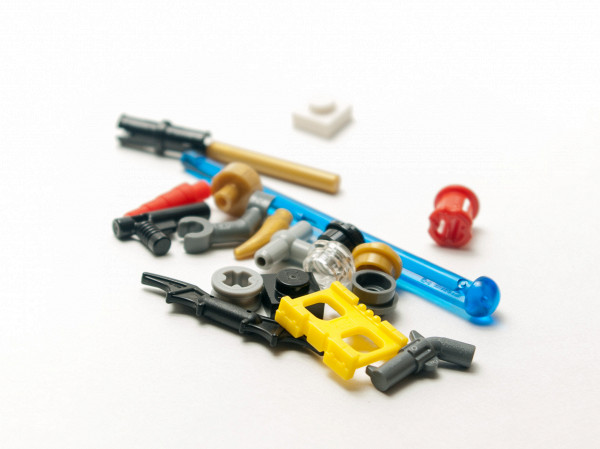 We will break ordinary review workflow for now, and will start with ther car, not minifigures.

So I would like to present you the finished build. If you look carefully you will notice that the box image is bigger than actual car, however, we are already used to this sad fact.

I think set designers were inspired by some Rolls Royce model, may be even Rolls Royce Phantom II. But I do not understand why they have chosen such wheel solution: 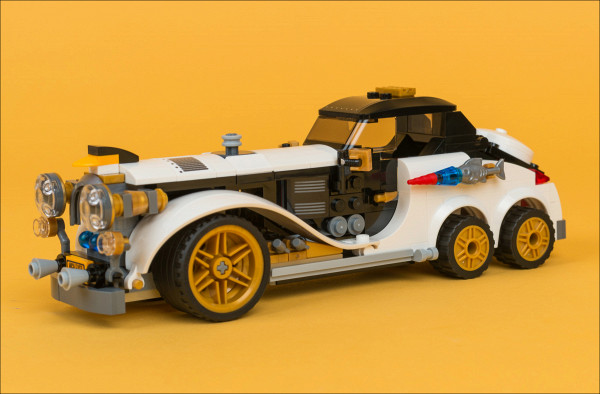 If we take front look the Penguin's car, we will notice many interesting details, for example headlights. As manufacturer emblem we get Penguin, it is more predictable than hen in Jokers Lowriders. According to "Offence is the best defence", Penguin's roller has two "shooters" in the front. Unfortunately engine grilles are made by stickers, i would like to see sticker less solution. 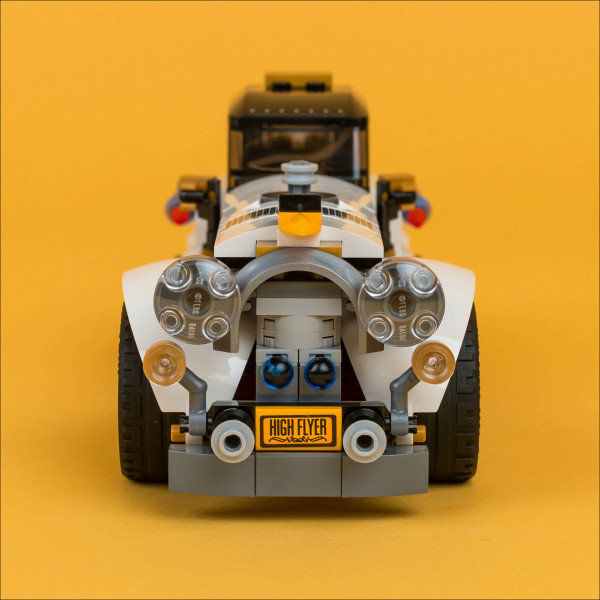 It seems that all LEGO Batman Movie has one illness, it is called "Length". Before I was whining about Lowrider length, Penguin's car is long and narrow, and this is most noticeable in reality. 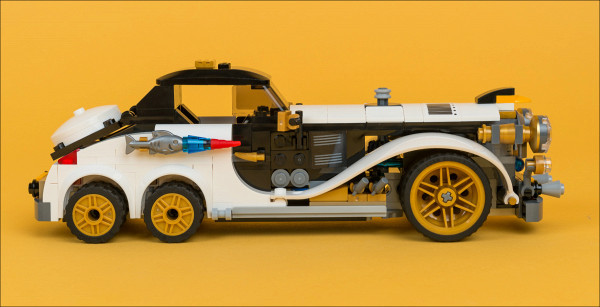 If you look precisely you will find an interesting bonus - four revolvers, attached behind front wheels. I can't explain their position. It makes sense if it appeared in LEGO Batman Movie, but no, there wasn't anything with these guns. This car has almost no screen time in fact. Four (or with extra part — five) revolvers fully unneeded according set setting, but great present from peaceful LEGO. I am very happy. 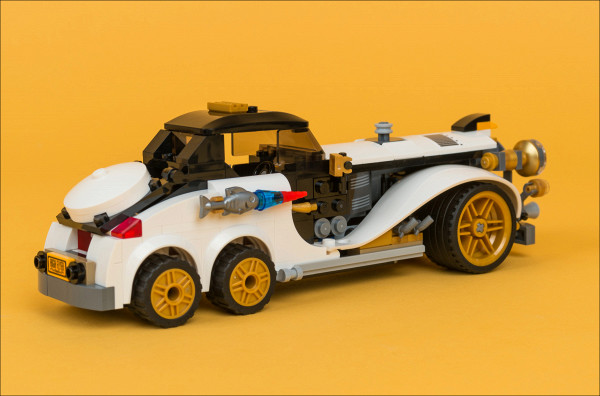 Small part above engine is a shooters trigger. You can't shoot them separately, only together. 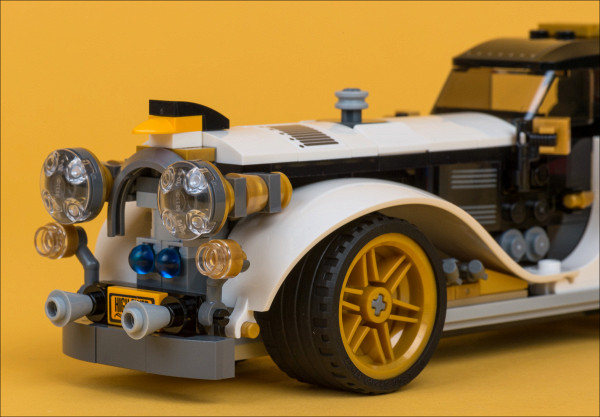 We get two fish (some sort of fish missiles) as a bonus. I can understand penguin based rocket launchers in movie from 1992, but fish missiles is beyond my imagination... 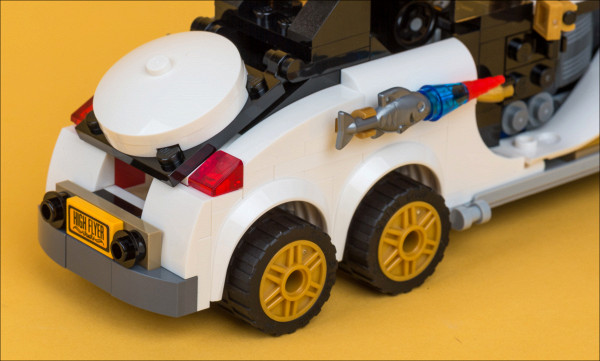 There is another set feature, if you open a trunk, you will fund water scooter in it. Penguin can use it to escape Batman. 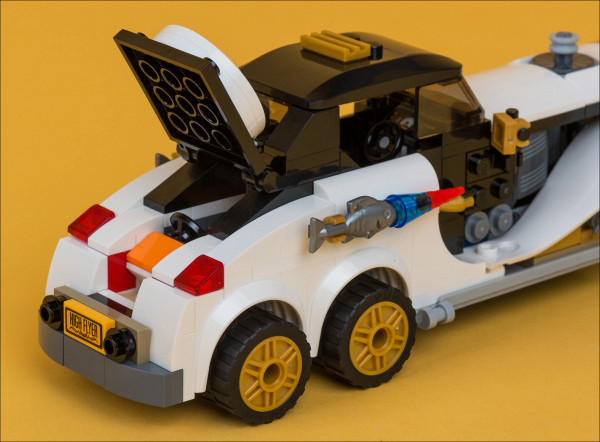 Scooter is minimalism miracle, it is made from 7 (!!!) pieces, and in fact I'm very annoyed that they haven't put another orange flipper as extra. 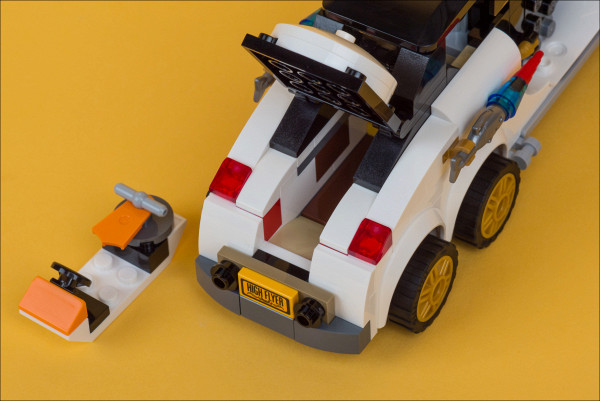 LEGO doesn't like car door, most of the new sets make us to put minifigures inside using roof, not doors.

Cabin is single placed, control panel is interesting, unfortunately it is sticker again. 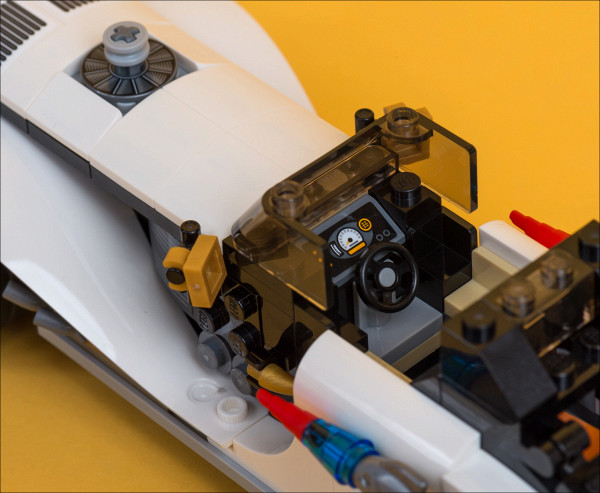 Penguin has child legs, so he seats standing, this make problem for putting other minifigures there. Batman doesn't fit while standing, and doesn't fix while seating. But he is Batman, he doesn't need fixture. "Life doesn't give you seat belts" (c). 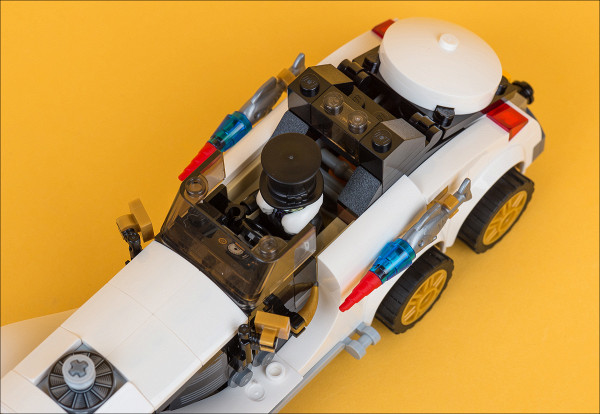 Anyway, car is pretty interesting, and appropriate for egoistic and evil character, such as Penguin. Also this explain only one seat, because you know, he only had one butt. 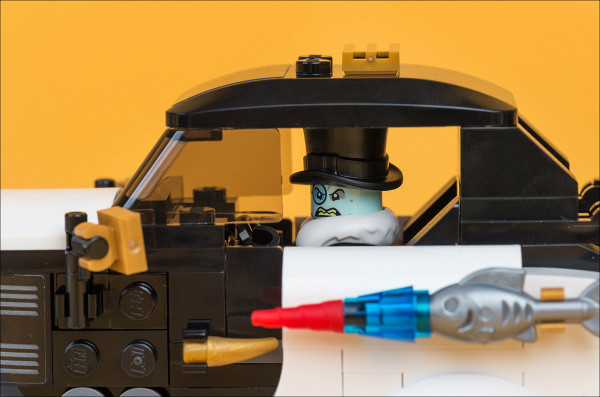 After climbing on roof Penguin can look down on people, even on Batman.

So let's finish with car. There was interesting "mod" of this car on Eurobricks: small wheels were replaced with normal one, take a look here.

Let's get to the minifigures now. There are two of them in this set. This is Penguin of course, also you get a Barman, coz you know, it is a LEGO Batman Movies. Another LEGO Batman Movies set in my collection, and again, I doesn't get smiling Batman from the box, that is unfair.

I think Penguin has been taken from mentioned about "Batman Returns" movie, he was magnificently portrayed there by Danny DeVito. His character - Oswald Chesterfield Cobblepot, also known as Penguin, was very interesting. He is unpleasant, disgusting sometime, and in contrast to Mad Pierrot from "Cowboy Bebop", I wasn't sorry for him, but he played masterfully. According to minifigure proportions they are stout, so to make "fat" penguin they draw a belly on him, like they do for women's waist. Batman is usual one, with 9 abs pack, utility belt, and harsh face. Face selection is not the same from the box. To get so harsh, not happy Batman, you need to buy 70903, 70905, 70909 or this set. 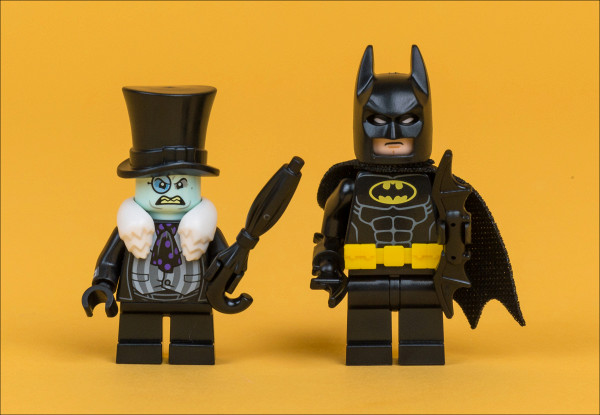 Penguin doesn't get second face, reason is his hat, that will leave another face open otherwise. Also there is no leg printing. This is price you should pay for wonderful fur collar, hat and umbrella. Such Penguin minifigure can be found only in this set. So minifigures collectors beware. Umbrella and top hat can be found in this set and in big 70909, I'm pretty sure that every LEGO fan should have such minifigure accessories. Definitely. 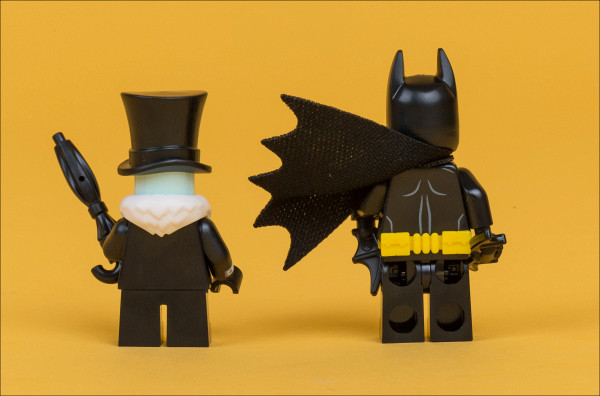 In contrast to Penguin, Batman is Two-Face. Also he has backside printing on torso. Also can't remain silent about Oswald's sleeves printing, they perfectly complete the image. 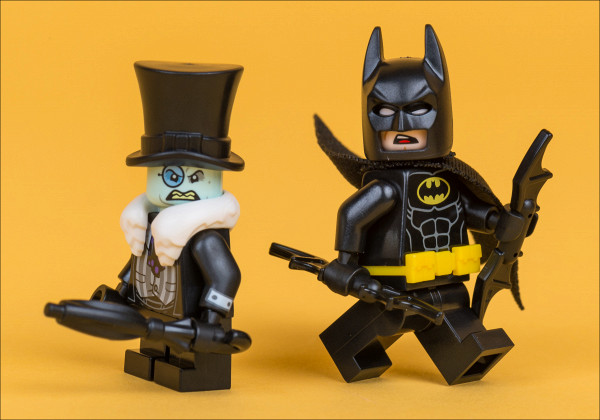 I don't understand, why they couldn't make glowing eyes for Batman, like they did in 76044, he looks much more interesting there. Maybe they wanted to give us ability to turn Batman into Bruce Wayne? But no set has this feature, also they hadn't put Wayne's hair in this set. 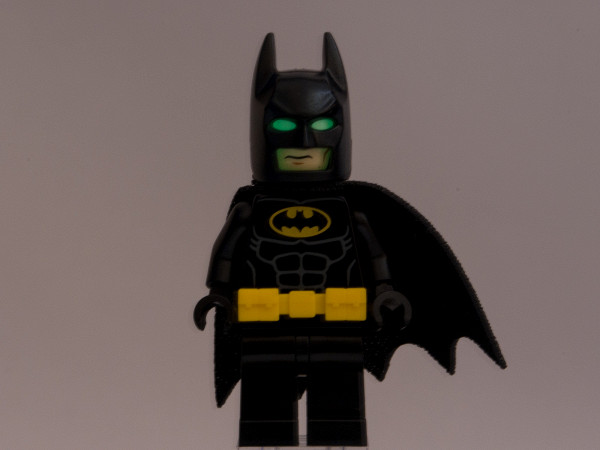 Let's look closely at the minifigures.
360 degree rotation for Batman

And one for Oswald. 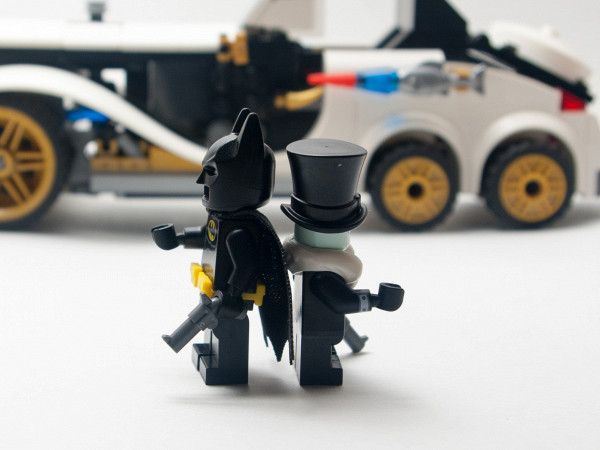 Top hat has big advantage, it hides second pair of Batman eyes, so we can make slightly fat Bruce Wayne. 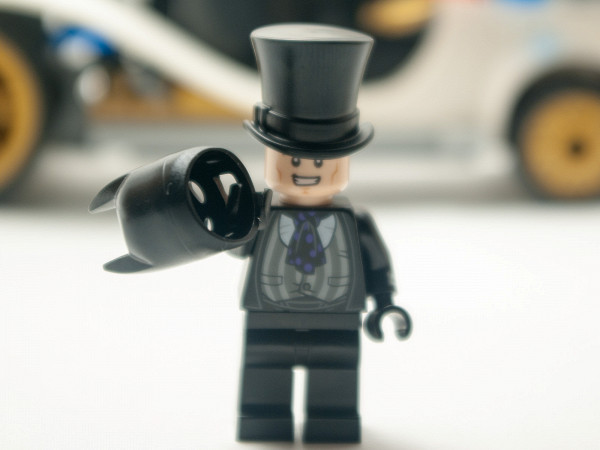 I have 70906 in my collection, so I can't resist to compare them with each other.

Penguins car looks longer, but in fact they are of the same length. I thought that Joker wanted to have the LONGEST cart on the street. 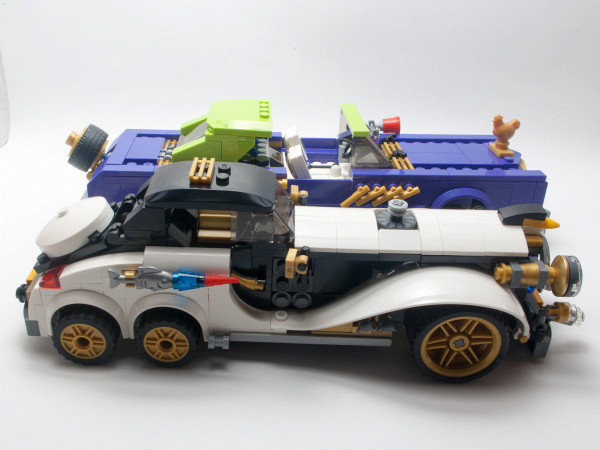 Joker car is wide enough to fit two figures, penguin's car barely fits one. Also Joker car has a working suspension. Arctic roller has trouble with steering. Accidentally if we take widest part of penguin cart, it seems that its width is same as Joker's one. 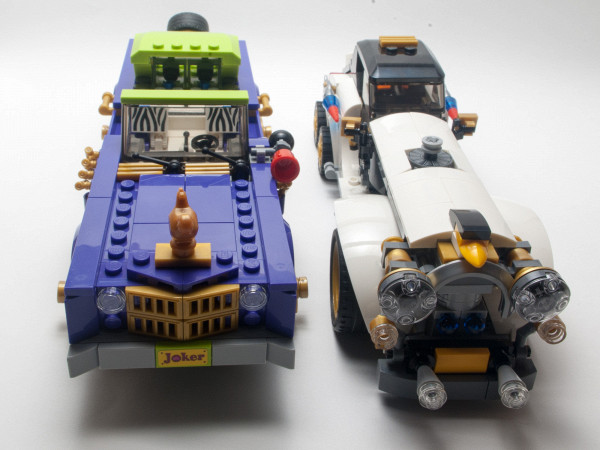 So our review has come to end. I don't want to spoiler, but Penguin vs Batman is available only in advertising, and on set box. It wasn't in movie.

Let me get this straight. Despite construction bloopers, and especially 4 back wheels , Penguin Arctic Roller is a posh car. Designers have made great work to make this car look rich and cartoonish at the same time. They make it funny and unreal. Penguin minifigure is interesting, I don't know how I will use his head, but all other parts will definitely be used. Batman minifigure is boring. It even hasn't got Batman smile. If you take two of these set, you could make a better car for penguin, replace back wheels, make it wider. All the theme transport seems a bit narrow (or too long, all according to your attitude). I would recommend buying this set. I wish LEGO for everyone. 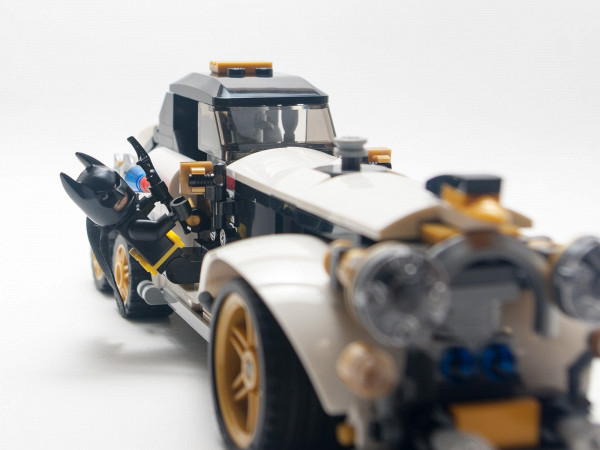