Share it
And it is Nexo Knights magazine gift again. And as we have started with heroes, let's continue with them. And today's special guest is 271608 Kid Clay. Clay Moorington - brave commander, has grown in ghetto, grew as an orphan, but has made himself. All nexo heroes are of classical fiction types. Clay is always training, and is always ready to show what's what. He is helping beautiful ladies, returning stolen things to them. He is Real Heroic Hero! Interesting metaphor, his name is clay, and he has made himself, as potter make beautiful things from clay. And he is Clay that has risen from dirt (clay).

But we concentrated to much on persona, let's get to the set itself. In this set Clay is shown as kid, but not a freshmen like Robin, he is just minified by "Minify Surprise" NEXO-power. As we don't get kid Clay in any other sets it is pure exclusive i think. Also this set has a bonus minifigure — train bot.

This promo is os filled, that all image on the packaging is real, this is very rare for them. I won't concentrate on packaging, because you can read about packaging details in past reviews.


As a part for scale we got a sword. It is bigger that scale square. Sometimes it is very good to get out of frame. Except the classical image of Nexo Power "NEXO Blade" that is available on any Nexo magazine gift promo, we got an image of "Minify Surprise" NEXO-power. 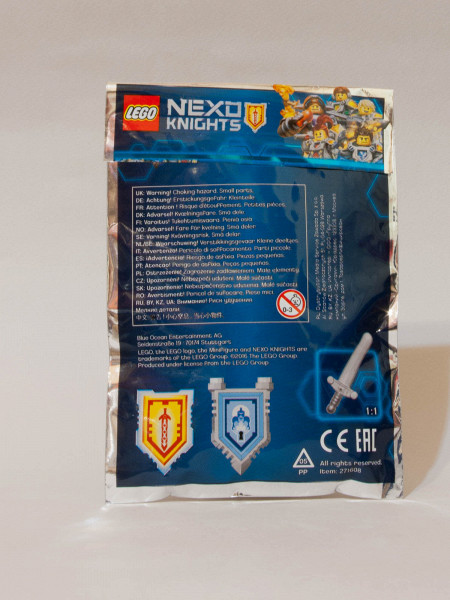 Pile of pieces looks ordinary. May be it is a bit bigger that usual, but it is not visible. 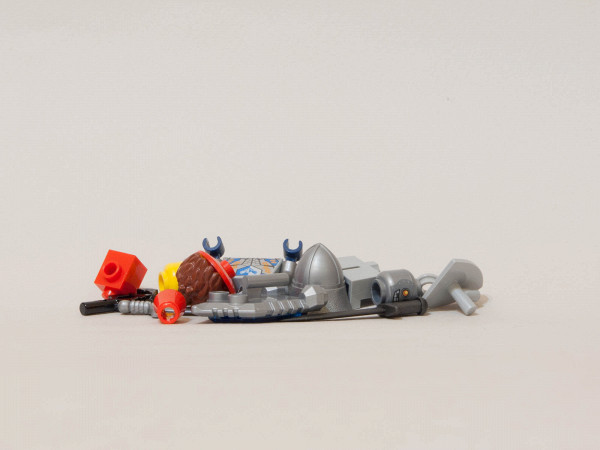 If you want you can see how Clay is building himself up. He already made himself, so it is not hard to him.

Clay's torso is classical. We can see sci-fi armour and Hero trademark. There is an interesting reference to old Black Falcons theme. If we will look carefully, we will see, that trademark is almost the same but mirrored and in other colour palette.

Legs are without prints. The face is frowning.

We can see that face is traditionally two sided. Second emotion is rage (or strong sadness)). Torso is a bit different from other ones. We can't see exo-skeleton, but armour. There is no printing on back side of the legs either. 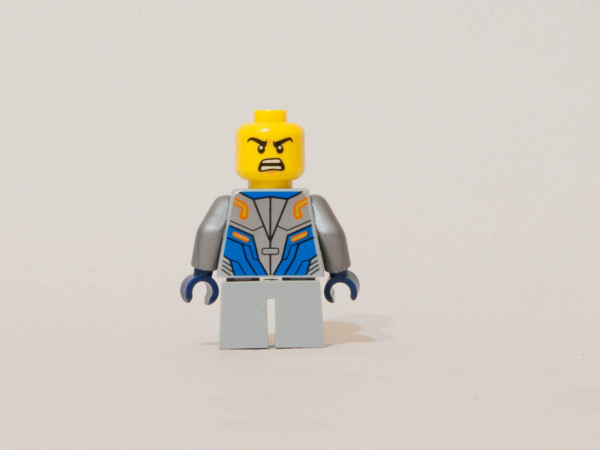 "Minify Surprise" Nexo power doesn't come in random nexo-power bags, so if you want to get a full collection, you will need to find this promo. Shield is pretty big for such a small hero, sword has rounded blade, so may be it is train one. 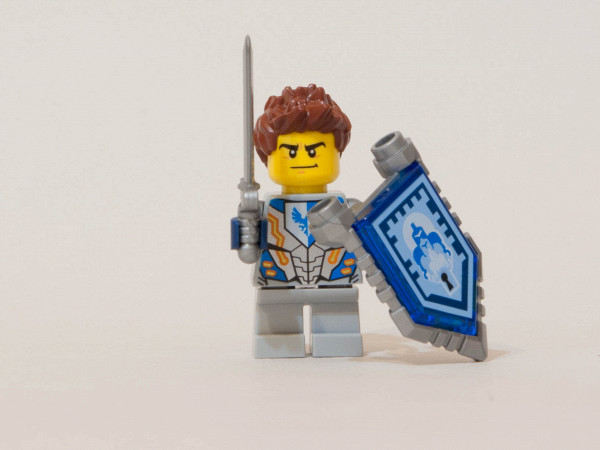 Second minifigure (don't know should it called so, or not) of this set - is Clay's train bot.
I like Nexo knights, they are pretty advance ones, all dirty work is done by bot, and all they have to is be a knight. But why do they go to defend peasants? I thought that peasant jobs also should be done by bots.

This bot can't walk. It is destiny is standing and defending himself. Front face have some sort of iron mask printed. I think it will look good at space robots mocs. Very interesting head part imo. 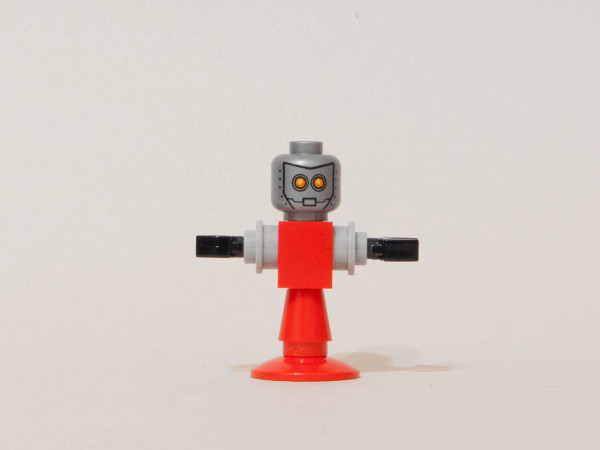 Bot's face also two sided, second side hasn't got an iron mask on it. Bot grins mischievously, his eyes have jihad fire in them, one tooth is knocked out. I think it is Nightmare level. Other parts of bot are not interesting. For shoulders we get a pretty new part 85861. First sets with it appeared in 2010, but they were hard to get promo sets, and this part became widely more available in 2013. 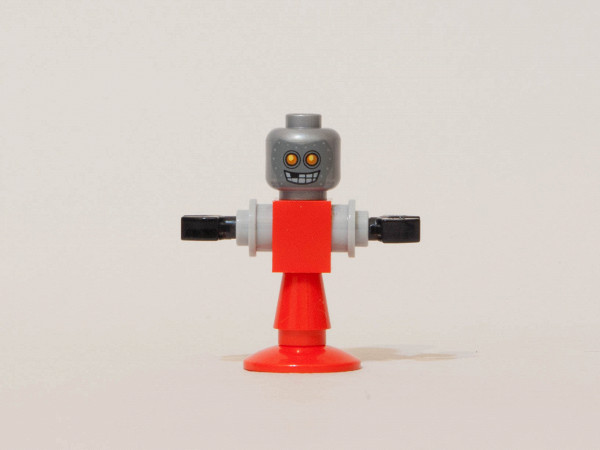 Train bot hasn't received Nexo power. He is second class citizen in Nexo-Universe. Shield is ordinary, the same part can be found even in 70s Castle. Sword is newer mold, with a sharpened tip, Clay is pretty self-confident. He will fight with armoried bot with train sword. Brave or stupid?

Bots helmet also classical one, we have seen it in Castle theme for ages since 70s. No new futuristic stuff, only good ol' metal. Helmet is in Flat Silver, such helmets available only for Nexo Knights bots. May be social level in Nexo Universe is differentiated by helmet colours? 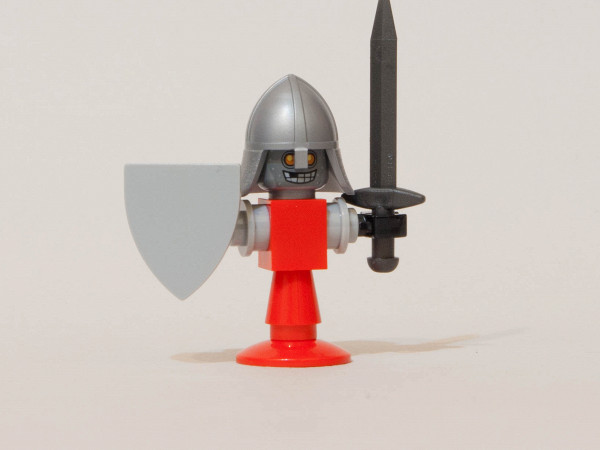 And so the set is fully setup: Clay is happy posing for photo (He is not Lance, why is he doing this? ), and bot in a kNightmare mode waiting to show Clay what he is capable of. 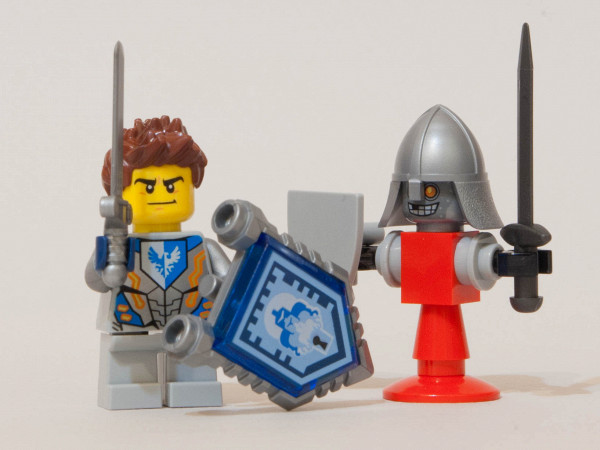 In a Nightmare mode, bot is left handed, it made harder for Clay to fight him. 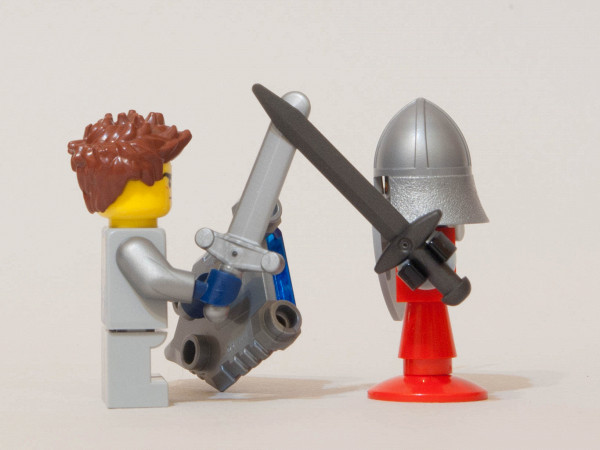 In standard mode Clay is easily blocking the attacks using his shield. 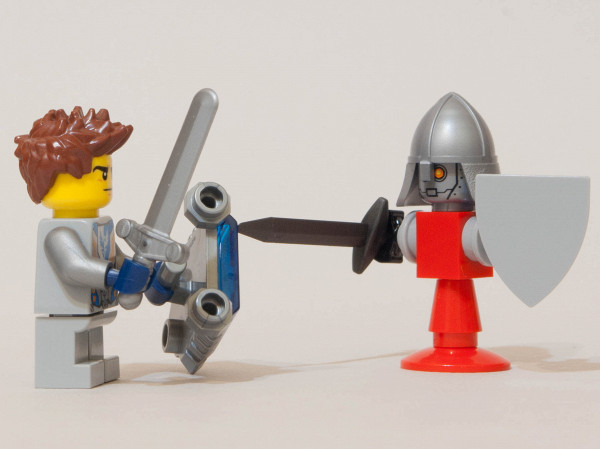 It is very funny to replace the bot's helmet with Clay's hair. He suddenly become more individual, a character. Clay also looks better with a helmet.
I think Clay's mastery is in his hair, may be he should grow it longer. 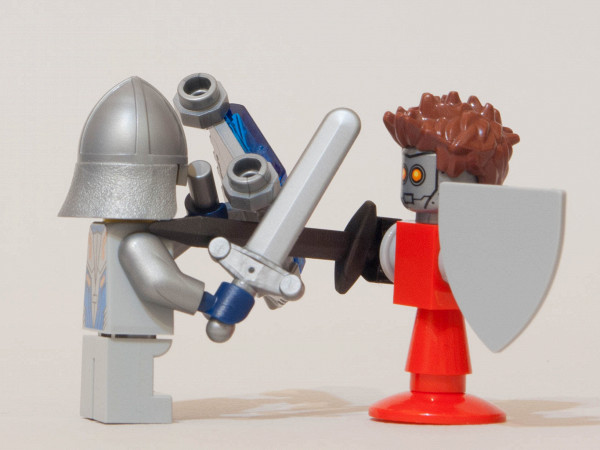 Clay's training may be very intense, but i do not understand this nexo power purpose. It is Clay who've become smaller, not bot. And this is strange.

On the other side, this promo is pretty balanced, it is self playable, you have two characters in it. Very pleasant gift from a magazine. 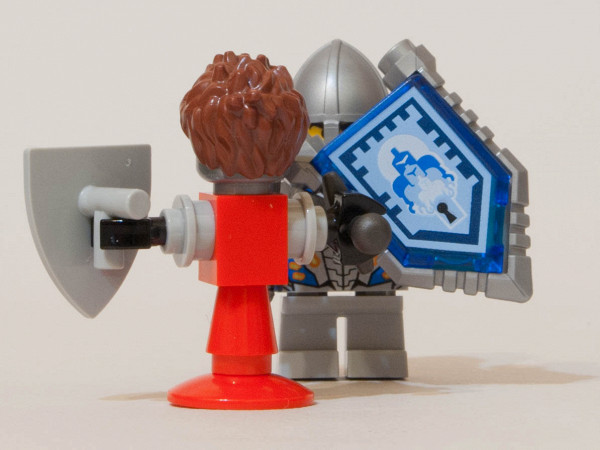 Clay can wield two swords at once. If you put swords together, you see that Clay's sword looks pretty like train one, although in other Castle series it is a general battle sword. 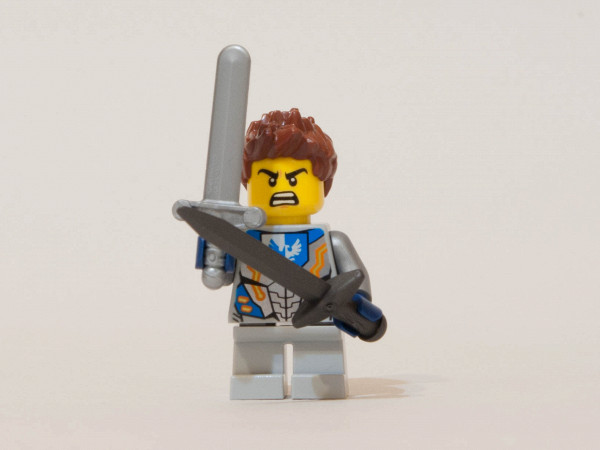 Bot is too short to handle both shield, but now we know who has made Clay a kid, i hope Merlin 2.0 is possible to give him his own height back, or it will be hard to command Axl, minifigures can't bow head, so Axl won't notice Clay at all :) 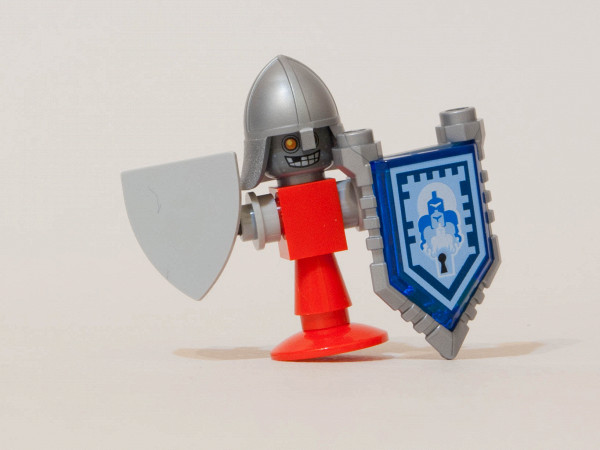 For a scanning fan, who is to lazy to go to LEGO.com for Nexo Powers list , here is a shield. 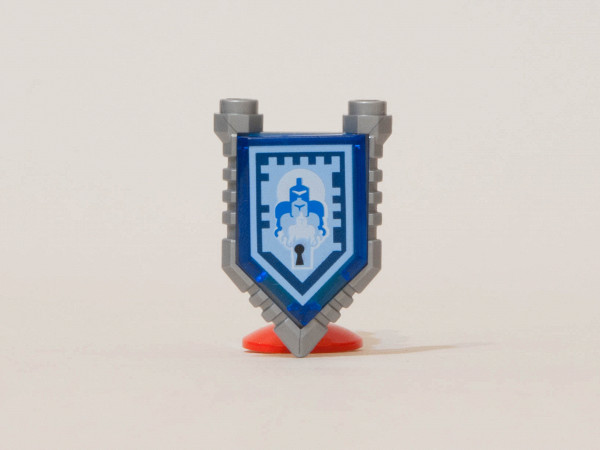 So it's time to finish the review. This is a mighty good set, with rare minifigure and rare nexo power. Bot makes a set more interesting. This is the case then you won't whine about money thrown own for this magazine issue.


So see ya on next review. I wish LEGO for everyone. :)
Share it